Are you planning a trip to Japan but want to avoid the typical visit to cities like Tokyo and Kyoto which so happens all your friends have been to? So you want to have an adventure or experience that you could call your own, yet still yearn to experience the joy and comfort that a city provides?

Kobe, a city situated in the west of Japan, between the Rokko mountain range and Osaka bay, is the capital of the Hyogo Prefecture. Considered to be one of the most important port cities in the nation. It was one of the first ports to be opened to foreign trade thus giving the city a lot of exposure to many different cultures which can still be felt today. As it is smaller compared to the other cosmopolitan cities of Japan, Kobe is perfect for wandering around and getting lost in the cultures of its streets.

1.  What You Need to Know About Kobe

With a population of around 1.5 million, people from Kobe are well versed in their local history, accommodating to tourists, and have a generally pleasing attitude towards visitors. The local dialect is Kansai, which is also spoken in the neighboring cities of Kyoto and Osaka.

As a port city, Kobe typically experiences strong gusts of wind from the sea, thus making the city really cold. January is considered to be the coolest month for Kobe, with temperatures averaging to 5°C (41°F), and July to August as the hottest, with temperatures going up to 28°C (82°F). If you are planning to visit Kobe especially in the colder months, make sure to bring lots of layers that you can pile up all throughout the day. It even gets colder once the sun sets and it is best to be prepared for the cold so your trip would go without a hitch!

As with most parts of Japan, the best time to visit Kobe city is during the seasons of Autumn¸ when leaves turn, or during Spring, when flowers are in bloom, or when cherry blossoms fall. These are the best times to visit as the weather is perfect for long walks around the city with family and friends or that special someone.

Getting around Kobe is very easy! If you are adventurous and love seeing every nook and cranny a city can offer, walking around is a viable option as many of the attractions are within walking distance of one another. However, if you are pressed for time and want to visit as many places as you can, there is a public tourist bus that goes around many of the attractions in the city. I suggest that you take one of the many public transportation passes that are available for tourists. These include the Kobe Meguri 1 day pass, which costs 950 yen, and the Subway and Bus Day pass, which costs 1030 yen.

2.  Kobe Beef And The Best Restaurants To Enjoy It

re the best restaurants to get it from

As I have mentioned, the city of Kobe can get pretty cold and I just can’t help but imagine a warm meal of Kobe beef, cooked to perfection that only Japanese master chefs have the skill to create. As I look out the window of the steakhouse overlooking the bay area, the world class meal just hits the spot.

Now the million dollar questions is, should you go for Kobe beef or Wagyu beef? Now you may come along on this fork in the road when the waiter asks you, would you like kobe beef? Or wagyu? Well it’s good to know that all kobe beef is wagyu, but not all wagyu is kobe. Wagyu is the general term for Japanese cattle whose meat tends to marble. Kobe beef on the other hand is classified on a much stricter set of rules. By law, Kobe beef must come from cattle that was raised in the Hyogo prefecture of Japan. Unlike normal cattle which are fed pasture grass, cattles that are bred to be Kobe beef are fed a specific diet of dried forage and grass such as rice straw and is mixed with other ingredients such as soybeans and barley. The process behind Kobe beef certification is very rigorous in order to maintain the quality of meat that is recognized as one of the bests worldwide.

Now that you have a general understanding of what kobe beef is and how important it is to know what makes it special, you might wonder where the best steakhouses in Kobe offers this. One of the most well-known places to get Kobe beef is Wakkoqu. Wakkoqu gives you the full Kobe beef experience as it gives its customers the freedom to choose the cut of the beef and the ingredients that go with it. Each table is accompanied by a chef who will guide you in choosing the right sauce and seasoning for you. Each meal is cooked right in front of the customers on large iron girdles. If it is your first time eating Kobe beef, I recommend that you only season this with salt in order to fully taste the richness of the world renowned beef. Another restaurant to consider is Ishida Kitanozaka. This is a smaller place which feels comfortable and more traditional ambiance. Aside from this, Ishida Kitanozaka is well-known for their accommodating staff and their pride in the Kobe beef. They would gladly tell you the origins of Kobe beef and teach you the best way to enjoy your meal.

It is understandable to think that most people only know the city of Kobe for its beef, but this city has so much more to offer whether it be different cuisines, cultural attractions, and natural wonders.

As I have previously mentioned, Kobe city was one of the very first ports to open up its trade to foreign countries. This has allowed local Japanese identity to develop into a fusion of mixed cultures, bringing about a mix of different cuisines that are appreciated both by locals and tourists. French cuisine is very popular in the city with restaurants such as Kitano Club and Bistrot Cafe de Paris, serving dishes that are authentic and world class. Chinese cuisine is also well accepted in Kobe, due to its history with Chinese traders. The best restaurant for chinese cuisine in the city would no doubt be Totenkaku Royal Chinese Restaurant. Located in Chinatown, this restaurant has been serving customers authentic Peking duck since 1945.

With the rise of the industrial era and the increase in global trade, the Akashi strait had experienced a significant increase in large ferries that would pass through to enter the port city. This, plus the natural inclination of the area to be hit by storms, had lead to major concerns about public safety. When two ferries had been involved in an accident in 1955, the government was prompted to begin plans for a bridge that crosses the strait. After 43 years of planning and construction, the Akashi Kaikyo Bridge was opened to the public. It is the longest suspension bridge in the world and is home to attractions that any bridge or engineering enthusiast would love to see. On the Kobe side of the bridge lies the Bridge Exhibition Center which gives a detailed explanation about the construction and history of the bridge. Also on the Kobe side of the bride, an observation deck dubbed the Maiko Marine Promenade allows tourists a great view of the bridge interiors, Akashi strait, and Osaka bay.

With the rich cultural diversity apparent in the Kobe landscape, there are many cultural spots that you could explore. Nankinmachi is the local chinatown of Kobe city. Located in the center of the city, Nankinmachi is host to many restaurants and shops that feature a fusion of Japanese and Chinese cultures. Beautiful landscaped gardens are scattered throughout Japan, and Kobe is home to, in my opinion, one of the more serene gardens in the country. Sorakuen was owned by one of the early mayors of the city and since 1941, has been open for public viewing. A short distance from Motomachi Station, Sorakuen features the remnants of the original garden which was damaged during the war. If you want to explore the artistic side of Kobe, look no further than the Hyogo Museum of Art as well as the Kobe City Museum. These two museums display a wide range of historical pieces that depict the evolution of Japanese artistry.

You might think that Kobe is nothing but a city and might want to visit the natural landscapes  that are found throughout the nation. Don’t worry as Kobe is surrounded by one of Japan’s best mountain ranges, Rokko mountain. Accessible via the Rokko cable car or the Rokko-Arima ropeway, Rokko mountain gives tourists the best view of Kobe city as well as the neighboring city of Osaka. Many different attractions are scattered in the peak of the mountain and it will come to no surprise if you end up spending your whole day just wondering about.

There are several ways to get to Kobe depending on where you are coming from: 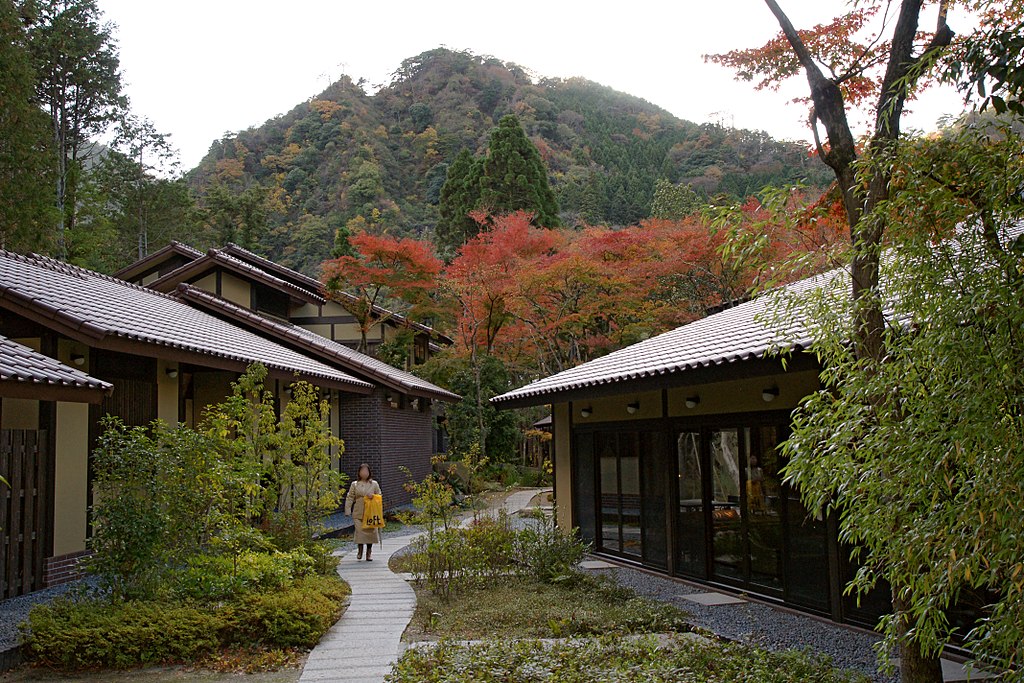 There are a lot of accommodation options in Kobe depending on your budget. If you do not want to splurge on accommodation the best option for me is to book through Airbnb, Inc. I have nothing but good experiences with Airbnb in Japan. Stays are well maintained and well prepared for you as a guest. All the Japanese hosts I have had are all accommodating with my questions and even prepared detailed list of instructions on how I can get to the place and list of stores, tourist spots, and stores surrounding the area, and one even prepared a welcome gift for me! If you want to experience the Japanese hospitality and if you are in a budget I highly suggest that you go with Airbnb. Aside from that, Airbnb hosts in Japan also offer free pocket wifi, which is very handy when you go around especially if you do not can not speak Japanese.

If Airbnb is not your style, you can choose from the various hotels available in the area. There are low budget hotels available in kobe as well as luxury hotels such as ANA Crowne Plaza Kobe, Hotel La Suite Kobe Harborland, Oriental Hotel, Hotel Okura Kobe, and Kobe Meriken Park Oriental Hotel. If you want to have the full traditional Japanese experience, I suggest that you stay in a Ryokan. What exactly is a Ryokan? A Ryokan is a conventional Japanese accommodation. You will see Ryokans all over Japan and the good news is you will find some in Kobe!

For the adventurous wanderer who wants to experience a different version of Japan, Kobe is somewhat a fresh take on the full Japanese experience. From the different sites they have to offer, the beef and multi-cultural cuisines, and even just their regional culture and history, Kobe won’t disappoint. To sum it all up, visit Kobe in Spring or Autumn, eat Kobe beef from the best restaurants, explore the natural and historical sites it has to offer and don’t forget to cherish every moment spent there.