Judo: The Gentle Way to a Decisive Victory

The Japanese word ‘Judo’ is derived from two Japanese characters/words, Jū and Dō. ‘Jū’ the character that describes ‘softness’ and ‘flexibility’. While ‘Dō’, which can also be read in Japanese as ‘michi’, can be translated into “the Way” or ‘Way of Life’. It is commonly used in Asian martial arts as a term for “discipline.” Therefore Judo, or “gentle way”, is not just a martial art, but a philosophy in itself and a way of thinking and living. The word in itself represents the central teaching of the martial art’s philosophy of maximum efficiency through minimum effort, at the same time a more gentle approach to self-defence, as will be explained further in the text to come.

The Growth of Judo in Japan

The beginnings of this martial art can be traced back to the year 1882 by Jigoro Kano, the founder of Kodokan Judo Institute in Tokyo, Japan. Jigoro-san started his career in martial arts by mastering several styles of Jujutsu, another Japanese martial art. He, Jigoro-san, sought to understand Jujutsu in a much deeper level as a way to counter the culture of bullying prevalent in the Japanese youth. This spurred him to develop a form of self-defence that all kinds of people, whether big or small, male or female, may practice and benefit from. Kano took many forms and techniques from Jujutsu and refined them to produce a martial arts form that perfectly incorporates his philosophies of “jū yoku gō o seisu” (softness controls hardness), “jita kyōei” (mutual welfare and benefit), and “seiryoku zen'yō” (maximum efficiency, minimum effort). He aimed to teach that resisting bigger and stronger opponents will only result in defeat. It is only through careful evasion and manipulation that one may come out victorious through the loss in balance of the opponent. This resulted in a unique martial arts form that through a careful balance of attack and defence, will provide a victory that neither the attacker nor the opponent is harmed.

The practice of Judo had gained its first rise in national popularity when in a martial arts competition in 1886, the Judo team headed by Kano-san himself had defeated the best Jiu Jitsu practitioners in the country. Soon after, Judo was then integrated into the physical education system of Japan and Jigoro Kano was named president of the University of Education in Tokyo. This started his research into the ancient forms of Japanese Martial Arts, which he then integrated into modern Judo.

Since then, Judo had gained international popularity and Judo is now recognized as combat sport that was even included in the Olympics. Today, the world’s premier Judo organization has to be the International Judo Federation, commonly referred to as the IJF. Founded in 1951, the IJF holds the annual World Judo Championships as well as the World Judo Tour, which consists of the Grand Prix, Grand Slam, Master Tournament, and Continental Open Tournament. Notable athletes that have risen to the very top of this combat sport are Ronda Rousey, Miao TIan, Kayla Harrison, and Ryoko Tani.

Techniques and throws for the aspiring Judo Player

A person who practices Judo is often referred to as a Judoka. Typically Judokas train in dojos and must sacrifice a significant amount of time and effort to mastering the art form. Training as a Judoka involves learning all the techniques, called waza, in succession according to their rank. There are three main types of waza apparent in Judo, nage-waza (throwing techniques), katame-waza (grappling techniques), and atemi-waza (striking techniques).

Katame-waza is the term for the techniques used to grapple and pin an opponent. These are forms of submissions or pinning techniques that aim to incapacitate the opponent. The Katame-waza, much like the Nage-waza, can be subdivided into three categories, the Osaekami-waza (holding techniques),  the Shime-waza (strangulation techniques), and the Kansetsu-waza (Joint techniques). Osaekami-waza refers to techniques that are used to subdue an opponent onto the floor. The aim of these techniques is to pin the opponent onto the floor with both shoulders and hips flat. The Shime-waza is a set of moves that revolve around cutting of the opponents oxygen supply. Strangulation techniques may use both the attacker’s and the opponent's’ clothing as well as their limbs in order to strangle the opponent into submission. Care must be taken on both sides of the bout as one may seriously get injured should the technique be taken too far. The last Katame-waza subcategory is the Kansetsu-waza or Joint-techniques. These are techniques that are aimed at putting pressure on the opponent's’ joints to bring them into submission. Much like the Shime-waza, care must be taken to ensure the safety of each combatant as serious and permanent injury may occur should both sides be reckless.

Atemi-waza or striking techniques refers to moves in which the attacker, referred to as the tori, strikes the vital parts of the opponent, called the uke. Atemi-waza techniques are not permitted outside of demonstration judo.

The only thing that all levels of Judoka share with each other is the Judo-gi. This standardized uniform was originally conceptualized by Jigoro Kano by taking the various forms and figures of traditional Japanese apparels while merging it with thicker and more durable fabrics and stitching. This produced a uniform that students may train in repeatedly without fear of wear and tear. He used the forms of traditional Japanese apparel in order for students to easily apply the techniques of Judo into any situation where self-defence is needed. The Judo-gi consists of a thick and heavy coat made of cotton, called the uwagi, as well as lightweight canvas pants, called the shitabaki. In the international competition scene, the size, material, and fit of the Judo-gi are strictly regulated by the International Judo Federation. More often than not, the Judo-gi is limited to either white or a blue hue when competing in local and internationally recognized competitions and tournaments.

The discipline of a Judoka

As with any Japanese Martial Art, Judo is a discipline which one must slowly raise in rank. The ranking system signifies the level of knowledge and the mastery of technique that a Judoka has. The Judo ranking is signified through a belt, referred to as an obi, system starting at the white belt. Students of Judo are referred to as kyu. Across the globe many different color systems are used for the students of Judo. Western countries start with white then yellow, orange, green, blue, brown then ends with black. The original ranking system of Jigoro Kano started with blue, then white, then varying degrees of black. However, all Judo ranking systems recognize that once a high level of mastery of Judo has been achieved, a black belt is to be given to the Judoka and their rank is changed from kyu to dan. Typically a Dan will grade a Kyu’s ability and will award them with a rank up in belt when it is deemed that the necessary techniques and disciplines have been mastered.

Rules of Combat and Scoring an Ippon

With its evolution as a combat sport, modern Judo has a set of rules that ensures the safety of the players as well as the integrity of the competition. Generally, the rules of the sport can be summarized into 10 points. The first is the requirement for the uniform. Each contestant is required to wear the standard gi and belt. The second, third, fourth, and fifth rule describes the situation wherein an opponent is considered to be defeated. A competitor is considered to be defeated when both of his or her shoulders as well as the hips have touched the floor when thrown from the standing position. A competitor is defeated when he or she is pinned down on the floor and cannot break free from the grappled state within two seconds time. A competitor is considered to be defeated when through any means, he or she has lost consciousness. There is a stipulation in this rule that this will not be considered when the Judo match is friendly. Kicking and purposely breaking an opponent’s arms, legs, and neck are considered to be illegal in any Judo match, and will incur punishment from the association. Defeat is also considered when one has submitted to their opponent through the use of grappling holds. The sixth rule states that a combatant that is in submission and cannot find escape must pat the floor or the opponent’s body with his or her hand or foot to acknowledge that they have been bested. This rule was put into place in order for combatant to humbly accept defeat and to avoid serious injury that may occur when the submission is held for a long time. The seventh rule states that once a combatant acknowledges defeat through submission, the victor must release the submission in order to prevent any injury on the defeated opponent. In any Judo tournament the referee shall award the winner with a full score through the declaration of an “ippon.” The ippon ends the match and can be achieved from the standing or ground position.

The eight rule states that when a Judoka combats against a combatant of a different martial arts discipline, both sides understand that any and all techniques are to be freely used. This rule further stipulates that the Judoka also understands that the opponent is free to use techniques that belong to Judo regardless of their discipline. The ninth rule states that the Judoka shall not assume responsibility for any injury that occurs within the contest. This means that the Judoka, assuming all of the rules and guidelines have been met, is held entirely unaccountable for any injury that occurs to the opponent. The last rule states that both sides of the competition shall have two competent witnesses that will see to it that all rules shall be properly observed and agreed upon. This rule is set in place in order to prevent any side from taking action should any injury or death occur during the match. 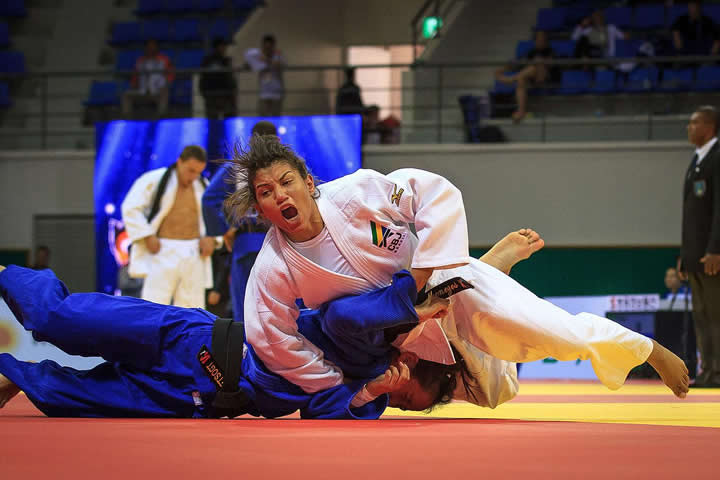 All in all Judo is more than just an art form. Against a river, one may only win by diverting the stream and reducing its strength.  Through the humble thought of reducing harassment and violence among youth, Jigoro Kano has sacrificed many of his days to give the world a martial arts form that has touch many lives and is revolutionary of its teachings. He has given the world  a form of mental and physical practice that can be used and applied by any person, whether big or small, male or female. It is important for any aspiring student of Judo to fully understand the teachings behind this martial art as the philosophies and discipline gained through its practice can be applied in any situation and that the techniques that are practices are but a physical representation of these. It is only through understanding that these is a way of life and through living these philosophies that one may fully master every aspect of what Jigoro Kano aimed to impart to the world. When a person polishes his skill to the full extent possible, he is not simply improving the techniques that are taught but he is expected to develop a stronger mental and spiritual state in accordance to the teachings. It is only through rigorous training and repetition that one may achieve both mastery of the techniques and fully understanding the discipline and philosophies behind it.

The Rise and Fall of the Japanese Edo Period

The Relaxing Views from the Maruyama Park

Everything about the Average Height for a Man in Japan