Aikido and the Meaning 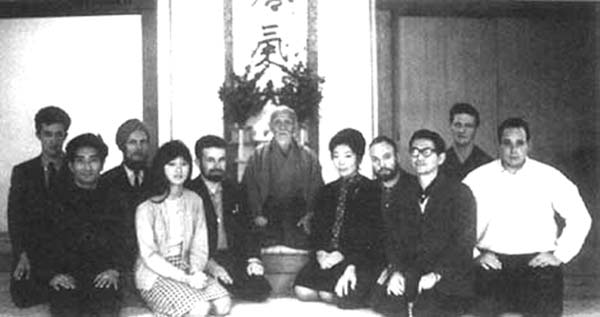 Aikido is a modern martial art developed by Morihei Ueshiba. Looking at the literally translation of the word, Aikido, it means “the way of unifying life energy”.  He was able to create this art by combining all that he had learned from years of studying different martial arts and searching for a deeper meaning of life through religion. Knowing this fact will help people who are interested in learning this art to understand why it is a defensive martial art. This deep connection with religious beliefs also explains why Aikido focuses a lot on centring one’s mind amidst all the chaos one might be going through in his or her life. It is quite meditative really. The movements used in this art represent balance with all the circular and smooth motions. Aikido is an art that doesn’t initiate, it only reacts. The very principle of this art is to use the strength of the opponent against him or her. This martial art was created because Ueshiba longed to take revenge on the thugs that used to beat on his father for political reasons. He wanted not to fight, but to be able to protect who he cared for which is why punching and kicking are not taught in this art. Scriptures on this art state the essence of Aikido is the cultivation of Ki, which is a term they use to refer to a person’s spiritual energy. Other writings say that the secret of Aikido is to become one with the universe. There are many more writings but all seem to point towards making peace with the world around you and the world in you. The rules of this art are quite vague but there are two acknowledged fundamentals. The first being that the students must be committed to the peaceful resolution of conflict whenever possible and the second being that the students must be committed to self-improvement. Throughout the years, many other versions of aikido were been made such as combat Aikido but the core fundamentals and beliefs are still what guide these other versions.

The Aikido Gi is the uniform for aikido training. Much like the Gi in other martial arts, it is made up a thick cotton that is very sturdy and quite heavy (depending on the preference of the user). It is usually white and accompanied by the belt which signifies the rank one has received throughout the years of training and practicing. In other words, the amount of time you spend training and learning will be acknowledged by the color of your belt. The ranking for the belt is different than that of a judo belt. In Judo, the belt rankings are usually white, then blue, then yellow, then orange, then green, then purple, then brown, then black. In Aikido, the beginning start with the white belt, move on to the green belt, then the purple, then the yellow, then the blue, then the brown, and finally the black. Like Judo, the black belt ranking still has levels of its own and these inner rankings are called “Dan” and the rankings go up to the 10th Dan. A fun fact about these rankings is that there is a rank higher than the 10th Dan and only one person may possess it. This highest ranking is represented by a red belt and the person who receives this honour is President of the whole Aikido organization. At least, traditionally, that’s what would happen. This also happens in Judo but the red belt is more attainable because 6th to 8th dan belters may wear belts with alternating red and black colors, while 9th and 10th dans are allowed to wear the solid red belt.

On a technical level, the methods used for this is very similar to the throws and joint locks in Jiujitsu and some other techniques from Kenjutsu. After all, it is a product of several things combined into one art. It focuses its movements in circular motions because this way, practitioners are able to use the momentum of their attackers against them. It is a lot like sword or spear fighting but instead of weapons, the hands and shoulders of the students are the instruments. Some might say that it is like Judo because of the locks and grabs used in each art but these two are quite different. Judo focuses on a battle of skills when it comes to tossing and locking enemies down flat on their back. Aikido, on the other hand, focuses on real life situations wherein the assailant is equipment with a weapon or is skilled with kicking or punching or any other strike that can be done. This is what makes Aikido the better self-defence martial art because of how practical it is. This is not to discredit Judo as a martial art. It is just a fact that if a people were to attack you and they were all with weapons, there is no way that one can use judo to defend himself or herself. Judo produced more physical fighters though compared to aikido practitioners. This is so because of the training they endure in their respective martial arts. Again, Judo training has more contact than Aikido training because the training in Aikido focuses on evading and redirecting attacks so it isn’t a surprise that Judo fighters can most probably withstand more of a beating since that’s what they go through in practice.

There is also a term in aikido class that they use to refer to your practice partner and that term is “Uke”. The uke is in charge of ensuring the growth and learning of their partner technically, subjectively, and spiritually. To put it simply, the Uke is a supervisor of the holistic learning of a student of the art. This is a great tradition to have because it is always more fun and interesting to get better with someone who will challenge you again and again to master the craft. Similar to majority of martial arts, what the student learns is depended on the level they are at. The white, green, and purple ranks are taught the basic, intermediate, and advance movements and locks. Once students reach the yellow ranking, they are exposed to fighters who are skilled it kicking. On the blue rank, they are taught to fight against people with bat like weapons as well as knife like weapons. The brown belt focuses on mastering defences against a boxer type of fighter and the black rank focuses on the mastering of the Ki and self-control. The higher ranking black belts are said to be able to keep an opponent pinned down with only his or her forearm as he or she kneels. This ability showcases what happens when you master one’s Ki, or spiritual energy.

Want to Learn? Check out the Hombu Dojo and the Aikido Kyoto!

Like all martial arts, there is an organization that handles the growth and direction of each martial art. In the case of Aikido, that organization would be the Aikikai Foundation and they are in charge of what style and system of teaching and learning is to be implied in the Dojos under their watch. Aikido presently has been established in more than 130 countries, but if you happen to be in Japan and looking for a unique experience, trying out a class there will be one for the books. It’s just like how people say that ramen from Japan is better than ramen in other countries because of its authenticity. Aikido originated here so learning it in Japan would definitely be an interesting thing to go through. Up to this day, the foundations of Aikido stand in the landmarks from its history and the Hombu Dojo is the perfect example for this. In 1931, the founder built this Dojo in dedication to Aikido. Back then it was a simple wooden building which was around 120 square meters. It was renovated in 1967 and was turned into a modernized building with 5 floors. It is located at Wakamatsu-cho, Shinjuku. The building might have upgraded but this place is still the headquarters for Aikido and the Aikido being taught in this place is very much connected to its roots so this is a special place to try out the martial art.

Another place worth a look is the Aikido Kyoto, which is a group of Aikido Dojos in Kyoto. This group of dojos were founded in 2003 and are registered under the Aikikai Foundation. They hold general and kids classes everyday at their dojos which are situated in Kamigyo ward, Fushimi ward, Sakyo ward, and Hirakata city. These dojos have a vision that aims to create an appropriate space shared by its students and by Aikidokas from all over the world to have a cultural and international referent in Japan. These dojos are recommendable because it is one of the more popular branches of dojos in Japan. Reviews for these dojos are commending the style of their classes and how service oriented they are here, especially to the youth trying to learn the art.

As it is in any gym and dojo, there are certain rules to observe during training that are done as a sign of respect to the art, the dojo, and the teachers. The usual Dojo Etiquette observed are as follows:

Most of these rules are things that common sense would probably tell you not to do but just to be sure that all students are on the same page in class, these are discussed in everyone’s very first session. Also, one thing that they didn’t put here is to have fun too! Learning this martial art will take discipline but not learning to enjoy yourself and the art will definitely be a loss because learning should be a fun activity. Learning to defend yourself should be something to be enjoyed. Just do not mix up rowdiness with enjoyment or else your Sensei might have to show you the way off the mats.

The Life and Works of Tokugawa Ieyoshi

Oda Nobunaga and the Unification of Japan

The Colorful and Vibrant Rainbow Bridge of Tokyo