Nachi, Japan - A Small Town Filled With Natural Beauty And A Profound Sense of Asceticism

Japan is popular for offering foreign travelers with a pleasant combination of the ancient and modern times. Its urban cities such as Tokyo and Osaka attract thousands of tourists looking for the latest gadgets and trends, while other areas such as Nara and Fukuoka house plenty of historical monuments constructed centuries ago.

With the seemingly endless number of attraction and activities Japan has to offer, it is virtually impossible for any tourist to not find a single thing that would suit his preferences. For those who want to take a break from the bustling cities and simply bask in the country’s natural beauty and religiosity, a trip to Nachi in the Wakayama Prefecture is highly recommended.

An Overview of Nachi, Japan

Nachi is a small town situated in the southern portion of the Wakayama Prefecture. This and three other towns – Wakamura, Ukuimura, and Katsuura – make up a portion of Nachikatsuura, or Nachikatsuura-cho, of the Higashimuro District.

Nachikatsuura measures about 180 sq. km. in area and is inhabited by an estimated total of 17,300 people. The area is famous for housing several shrines included in the Sacred Sites and Pilgrimage Routes in the Kii Mountain Range, a UNESCO World Heritage Site.

The main tourist attractions located within Nachi include a 133-meter high waterfall, an old shrine known as Nachi Taisha Grand Shrine, and an old temple known as Seigantoji Temple.

Nachi no Taki (Nachi Falls) – The Tallest Waterfall in Japan

Nachi no Taki, which also goes by the name Nachi Falls, is a 133-meter high and 13-meter wide waterfall that is considered to be the tallest one with a single uninterrupted flow in Japan. It is located within the Nachi Primeval Forest, which also houses the Nachi Taisha Grand Shrine and Seigantoji Temple.

The whole area is regarded as a place of asceticism for yamabushis, or shegunjas, which refer to mountain ascetic hermits who follow the teachings of Shugendo. Shugendo is another religion of Japan that integrates elements of Shinto, Taoism, and Buddhism.

Traditional Japanese mysticism says that yamabushis are blessed with supernatural powers. On certain occasions, they battled alongside warrior monks and samurai but mostly spent their time in solitude or forming loose associations with religious groups. Several yamabushis and star-crossed lovers used to leap from the top of Nachi no Taki in the hope of being reborn into paradise.

At present, practitioners of Shugendo focus on feats of endurance and self-discipline. They can often be seen in sacred areas such as Omine, Kumano, and Nachi, clothed in white and saffron robes and carrying a conch-shell trumpet piece known as horagai.

Two rocks can be located at the very top of Nachi no Taki that serve as guardians for the vicinity. Back in the ancient times, there was also a Buddhist temple within the Nachi Primeval Forest but unfortunately got destroyed in the 19th century. Every morning, Shinto priests leave offerings at the waterfall as part of their daily rituals.

During the year 1918, archaeologists found several important artifacts at the base of Nachi no Taki such as mirrors, statues, sutra cylinders, and altar fittings. These items have been placed under the care of the Ryuhoden, or Treasure Hall, located next to the 3-storey pagoda of the Seigantoji Temple.

According to reports, these treasures were buried by priests during the war times to keep them from being stolen and destroyed. Furthermore, there was an ancient belief that the world would come to an end by the 10th century so a lot of these artifacts were hidden as a means to preserve them.

Nachi no Taki may be reached from Tokyo by following the directions below:

A Guide to Exploring Nachi, Japan, and Surrounding Areas

As previously mentioned, Nachi houses several places that are part of Kii Mountain Range’s Sacred Sites and Pilgrimage Routes. The town and surrounding areas are regarded as important spiritual locations. Millions of pilgrims have journeyed through these places for centuries.

Several pilgrimage routes connect these areas, three of which converge on the town of Nachi. The Nakahechi Route, or also known as the Imperial Route, stretches north towards Hongu. This route was used by elite pilgrims and members of the imperial family.

Another route runs up the edge of Nachi and connects to Hayatama Taisha, one of Japan’s three Grand Shines (Kumano Sanza), of the Shingu Town. This short route merges with the Iseji Route, which runs up towards the Mie Prefecture.

The last route that converges with Nachi runs down the coast and goes around the Kii Peninsula towards the town of Tanabe, Wakayama Prefecture’s second largest city. Tanabe is regarded as the gateway of Kumano Kodo, which is a term used to refer to the network of pilgrimage routes that go through the southern section of the Kansai Region.

Following all three routes from Nachi requires more than just a short vacation trip. For foreign travelers who want to maximize their visit to the small town, visiting the temples and shrines listed below is highly recommended:

Fudarakusanji Temple is a short walk away from the Nachi Station. It is believed to have been established by an Indian monk during the 4th century when Buddhism had not yet been officially introduced to Japan. Its name refers to a mythical place located somewhere in the ocean near India called Mount Potalaka that serves as a Buddhist paradise.

The temple became famous because of “suicide monks” who were supposedly sealed in small boats and towed out to sea in order to find paradise. Some stories say that these monks would jump out of the boats to drown after being set adrift. There is a boat replica on display within the temple grounds. 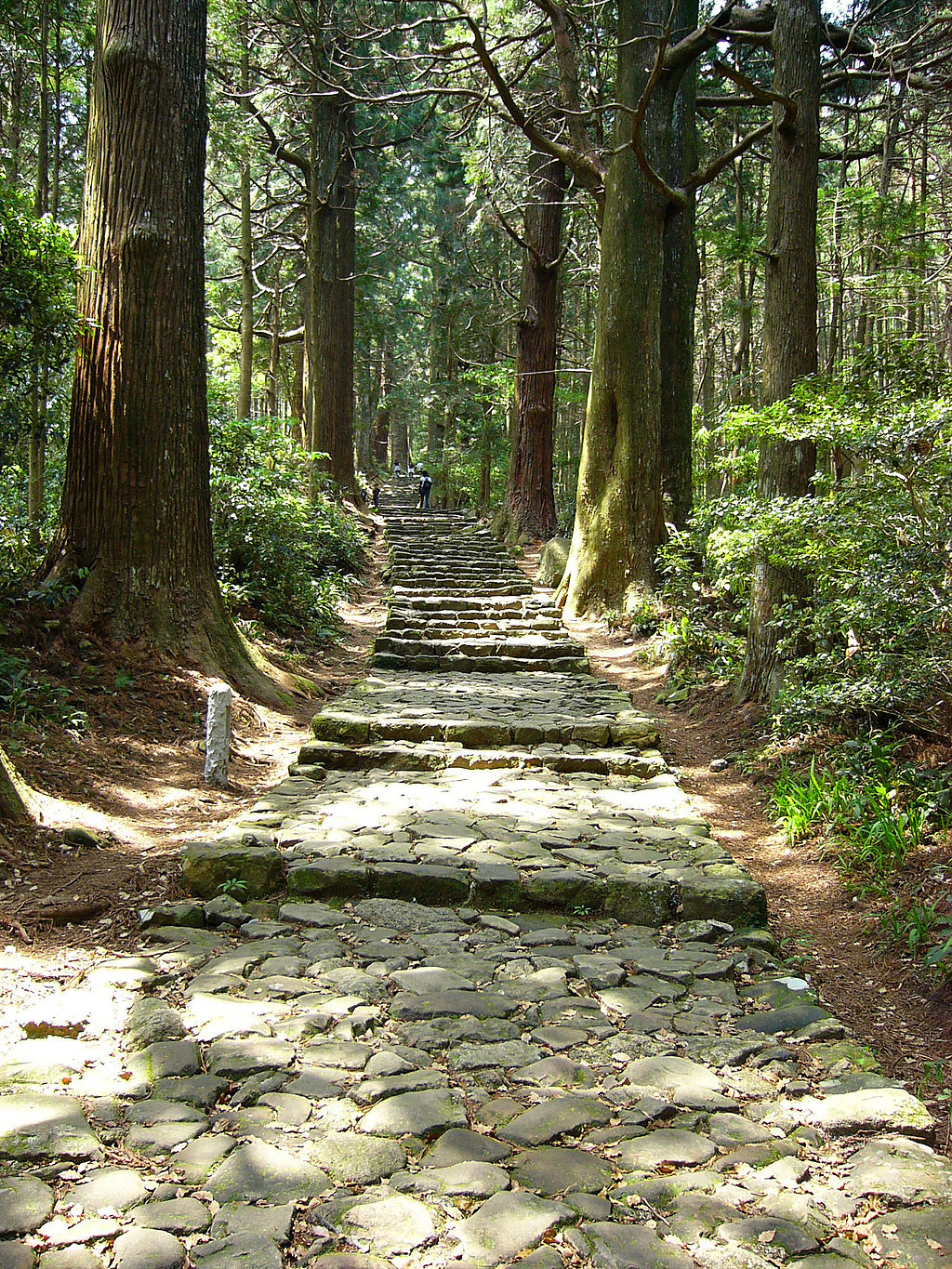 Daimonzaka, which translates to “Great Gate Slope” in English, is situated below the falls and features a 600-meter long, stone stairway that runs through an ancient forest. Many regular buses travel to the Daimonzaka Chushajo bus stop, which provides refreshments, toilets, and bamboo walking staffs for visitors.

A little beyond the start of the climb towards the valley, tourists can find a small tea shop called Daimonzakachaya. This place offers Heian Period pilgrim costumes for rent at a starting price of 2,000 yen.

Nachi Taisha Shrine is located above the streets where the regular buses stop for passengers disembarking at Daimonzaka. Tourists coming by taxi or car can go further up the area and park at a designated section located near the shrine. The streets heading towards Nachi Taisha Shrine are lined with several stores including restaurants, coffee shops, and souvenir shops.

The shrine stands on a massive complex which features bark-roofed buildings painted with vermillion. Visitors may enter the shrine any time they want. However, its hall that houses several artifacts can only be accessed from 8 AM to 4 PM and requires guests to pay an admission fee of 300 yen per person.

Seigantoji Temple can be located right next to the Nachi Taisha Shrine. Although they follow different doctrines, each area does not feature any boundaries to clearly separate themselves from the other. In fact, they were considered as a single place during the ancient times. The shrine and temple were only formally separated a century and a half ago.

It is believed that the Seigantoji Temple was established by the same monk who built Fudarakusan Temple. The temple is included in the Kumano Pilgrimage and is the first stop out of 33 other temples to be visited in the Saigoku Pilgrimage.

The temple grounds feature various structures and icons such as the Nyohodo, which dates back to the year 1587. It was rebuilt by Toyotomi Hideyoshi and is also known as The Hall of Lanterns.

Seigantoji Temple’s most popular building is its three-storey Pagoda known as Sanjudo Pagoda. The structure was constructed in 1971 as a way to commemorate the 300th anniversary of the original Pagoda that got burned down. Visitors may enter the building to get a better look of the Nachi no Taki for a fee of 300 yen per person.

For adventurous tourists, there is a path located behind the main buildings of Seigantoji that lead to Hongu Taisha. This route is known as Nakahechi, which can take up to 2 days to finish.

Hirou Shrine is situated somewhere along the base of the falls amidst the ancient trees. Tourists can locate this place by looking for a Chinese-style gate by the designated parking area near Nachi Taisha Shrine and Seigantoji Temple. From there, a short walk up an old hotel-like structure will lead towards an abandoned temple featuring Chinese-style structures.

Many brightly painted carvings and ornaments can be seen within the vicinity which look great against the natural beauty of Nachi. The area is surrounded by mist produced by the falls and provides visitors with a unique experience filled with humility and awe.

Tourists may choose from different kinds of accommodation in Nachi and nearby areas. There are several resorts located on the coast, luxury hotels, hostels, and inns in the towns, and even humble lodgings at temples such as Seigantoji Temple. Some of the top-rated options include:

The Weather & Climate of Nachi, Japan

Being located in the southern portion of the Kii Peninsula, which lies on the southern tip of Honshu, the weather and climate conditions in Nachi are relatively mild throughout the year. The area experiences a significant amount of rainfall that keeps its lush forests and rivers well-nourished.

During the winter season, not a lot of snowfall can be observed at areas other than the southern routes of the Kumano Kodo.

The Kumano Kodo can be reached by train or bus from Osaka, Kyoto, Kobe, and Nagoya. The JR Kinokuni Line (Nagoya) and JR Kisei Line (Osaka) have stations in Nachi and usually take about 3-5 hours of travel time.

At the Kiikatsuura Station, tourists may take regular buses to the Nachi Station, Daimonzaka, Nachi Taisha Shrine, and Nachi no Taki.

Behind the Biwa; The Japanese Lute

Everything You Need To Know About Fender Japan

Minato Mirai as the Harbour of the Future