Japanese animation, or better known as anime, has taken the world by storm. It is popular for making use of exaggerated features, such as odd hairstyles and large eyes, on its various characters. The themes and styles vary from one show to the other but are all entertaining, nonetheless. What further sets it apart from Western animation is its extensive list of distinct genres, demographics, and character traits.

The Importance/Meaning of Tsundere, Kuudere, and Yandere Characters in Anime

When discussing the girls of animated shows from Japan, there are three common words that a person may come across with – tsundere, kuudere, and yandere. As implied by the syllables, “dere”, found at the end of each term, all of these share a relationship with one another.Basically, these words refer to different personalities, particularly regarding their romantic behavior, exhibited by female characters. With anime series constantly showing cliché actions, anime fans came up with various terms to describe each one. It did not take long for the expressions to spread and the anime industry eventually embraced the concepts.

Basically, these words refer to different personalities, particularly regarding their romantic behavior, exhibited by female characters. With anime series constantly showing cliché actions, anime fans came up with various terms to describe each one. It did not take long for the expressions to spread and the anime industry eventually embraced the concepts.

The “dere” portion of each word comes from the term deredere, which roughly translates to “having a crush on somebody” in English. 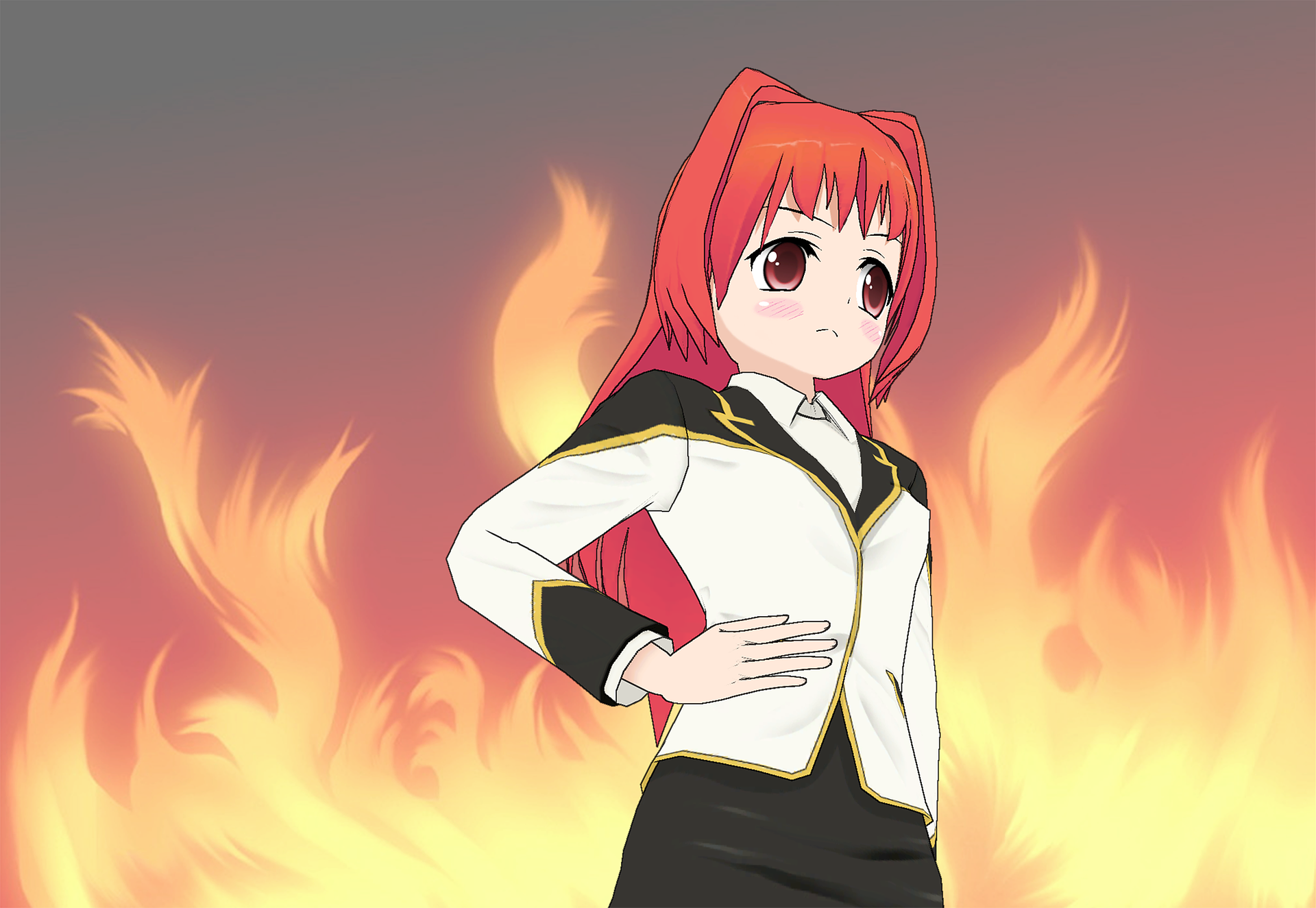 The term tsundere is derived from deredere and tsuntsun, which is an expression used to refer to grumpy or irritable people. As such, tsundere characters are best described to be a bit hesitant in showing kindness or affection towards their love interests or other people. They often carry a cold and tough façade to hide their true emotions.

Tsundere characters can be classified into two different kinds – Type A and Type B:

Type A tsundere characters showcase more of their tsun side than their dere side. These people often feature characteristics such as getting embarrassed when given a compliment, frequently using the word baka (which means idiot in English) when talking to their crushes, and making physical or verbal attacks on their points of interests.

Type B tsundere characters put more effort into maintaining their dere side than their tsun side in public. They are often considered to be friendly people who are quite generous when it comes to giving favors and offering help. However, they turn into almost completely different people towards their crushes, especially when something upsetting (often a perverted act) is done to them.

Common storylines that feature tsundere characters revolve around their love interests gradually breaking down their walls and encouraging them to let their sweet and kind sides out more often. One of the key phrases to watch out for when identifying these characters is “I’m not doing this because I like you or whatever.”

The Japanese term “kuu” is derived from the English word “cool”. It is often used to describe people who carry a sense of calmness and composure. Kuudere characters are typically the ones who take charge of situations and rarely show any emotions. They tend to talk in a monotone voice and act as though nothing in the world affects them. Many anime shows give these characters strict or business-like roles such as class presidents or executive assistants.

However, beyond their neutral exteriors lie their honest emotions which they keep bottled up through self-control. Admitting any feelings, especially romantic ones, is something that they treat as a weakness that they want nobody to find out about. As such, a lot of these characters do not know how to properly express themselves, while some do not even understand the purpose and meaning of their feelings.

“Yan” is borrowed from the term “yanderu”, which literally translates to mean “I am sick” in English. Unlike the two other dere character types, yandere characters keep their yan side hidden instead of their dere side. More often than not, these characters are mentally sick and can get crazy when it comes to their love interests.

Typically, yandere characters exhibit a cheerful and incredibly social attitude which makes them quite easy to like. However, when they start to have feelings for another character, their love serves as a catalyst for them to turn irrational and violent.

Their fear of losing their love interests to another girl is often the basis of their yandere personality. They will go to great lengths to make sure that this does not happen and are even willing to kidnap or murder their loved ones.

Yandere characters can be classified into two types – Obsessive and Possessive:

Obsessive yandere characters will do everything they can to keep their love interests to themselves. Anyone and everyone who stands in their way or who may cause a problem in their relationships are either heavily threatened or killed.

Possessive yandere characters are basically more insane than the obsessive ones as they are even willing to kill their actual love interests just so they will not end up with other people.

Many anime series put yandere characters on the receiving end of rejections to further escalate the storyline. There are also a few shows that keep the yandere side of their main characters hidden until the latter episodes to create unexpected plot twists.

The Importance/Meaning of Tsundere, Kuudere, and Yandere Characters in the Seme – Uke (Boy – Boy Relationship) Concept

A relationship between two boys or men is a popular concept in Japanese fictional stories and media. The genre is known as yaoi, or Boys’ Love (BL), and, generally, focuses on romantic and sexual aspects. Many of it are created by female artists and are often marketed for females, as well.

The genre makes use of a seme – uke concept which basically dictates one guy to be the dominant figure (seme) and the other to be the passive figure (uke). Seme characters tend to be aggressive and will clearly express their feelings to their love interests, while uke characters are often shy and feature more feminine personalities.

Other Types of Dere Characters in Anime

There are, of course, other dere archetypes other than tsundere, kuudere, and yandere. These dere characters serve as potential romantic partners of the show’s main character but are often used as supporting roles, especially for harem anime (anime series with love triangles or polygamous relationships).

Bodere characters tend to be timid around their love interests but become violent like tsundere types when embarrassed or given a compliment.

Dandere characters exhibit a shy and quiet façade but tend to be talkative towards their love interests. Common roles that feature the dandere personality include bookworms, librarians, and busy students.

Deredere characters, as implied, are incredibly cheerful and caring. They do not shy away from showing their honest feelings for their crushes and often smother them with love and affection.

Himedere characters believe that they should be treated like princesses, regardless of whether or not they have royal blood. These people often hide their insecurities by acting superior and stuck up.

Hinedere characters exhibit the cool attitude of kuudere types mixed with a prominent sense of arrogance. They tend to be sarcastic and cynical but are actually quite sweet once their walls have been broken down.

Kamidere characters, as implied by “kami” which means “god” in English, feature a god complex. They are often proud and arrogant because of their belief that they should be worshiped and glorified. A lot of them tend to force this belief on everybody they come across with.

Mayadere characters are often given antagonist roles that eventually have feelings for the main characters. However, their emotions are not enough to sway them from their ultimate goal. As such, anime shows make use of these characters to create complicated situations about principles and love.

Oujidere characters serve as the male counterpart of those with a himedere personality. They often feature sharp eyes and a distinct fashion style which contribute to their façade of being superior to others.

Sadodere characters are basically sadistic in nature. They find joy in emotionally and physically teasing their love interests which evidently creates a confusing but entertaining storyline.

Undere characters feature obscure personalities as they exhibit a little bit of each of the yandere, dandere, and deredere types. They are appropriately called undere because of their habit of constantly saying “yes”, or “un”, to the wishes of their loved ones as a means to stay close to them.

Tsundere, kuudere, and yandere characters continue to be the most popular archetypes used in anime series of varied genres. Although often associated with female roles, a few shows or manga also incorporate these personalities in male, hero or villain, characters.

Furthermore, there are also several instances wherein a certain character exhibits more than one personality throughout the series. Some of the most popular characters for each of the three most popular dere types include:

The Life and Works of Tokugawa Ieyoshi

One of the Best in Japan: Sophia University