The Symbolism of Japanese Mornings: The Land of the Rising Sun

What is interesting about the name of Japan, the land of the rising sun is the fact that it was the Chinese who gave them this name. During the earlier times, China was quite an influential and powerful nation. They had the power to influence many of its neighboring lands including Japan and Korea. Japan got the name because it is located east of China, and when Chinese scholars look upon the lands of Japan they see the sun rising in the morning. This is why the country is aptly called as the land of the rising sun.

With this came further symbolisms on how important the rising sun was to the Japanese. It gave them energy, it keeps them living, it helps their livestock and their crops. The sun was an important source of life for the Japanese. Thus, every morning is a true gift of receiving blessings from the sun once again.

Just like in many places in the world, mornings are the best time of the day. It is when most people are fresh and energetic. It is a good sign that anything can start afresh despite the hardships and failures of the previous day. This may also be the reason why people greet each other ecstatically in the morning. To have that appreciative love and expression for the importance of morning in everyone’s life.

How to say ‘Good Morning’ in Japanese: Ohayo gozaimasu meaning

"Ohayou Gozaimasu" is the phrase to mean “Good Morning” in Japanese. This is a very important greeting because it is the first one given off in a day. Usually, greeting someone in the morning is a great way to share cheerfulness, happiness, and energy to another person. Greeting with a friendly smile can make a person’s day. These kinds of greetings are important just like how to greet in the afternoon and at night.

In more casual scenarios, some people just say "Ohayo" which is a word that directly means ‘Morning’. It is a shortened greeting that friends use among themselves.

This particular phrase directly translates to “Good Morning, How are you?”. It is often used by individuals who want to have short conversations with somebody after greeting them in the morning. This is usually used in a more casual set-up. It is best to remember to use this with someone that has a close relationship with the greeter.

The addition of the word ‘minna’ or ‘minna san’ before and after the greeting means that a person is greeting a whole group rather than just an individual. The phrase ‘ohayou minna-san’ means “Good Morning, Everyone”. The subject of the sentence has been changed depending on the context of the situation. This may be used when arriving at an office. It may also be used when greeting classmates inside the classroom.

There is actually no specific reply that should be given to “Good Morning” greetings in Japan. It could be replied with a simple “Ohayou” or “Daijobudesu”. The first word means good morning as well, and the second phrase means “I am good” in Japanese. Learning these basic greetings is important and helpful when visiting Japan for the first time.

Ways of writing and understanding in Japanese

The greeting "Ohayou Gozaimasu" can be written in its hiragana character form (おはよう). This is a shortened way of saying good morning. For more formal situations, the longer greeting of (おはようございます) can be used. For reference, the longer a greeting is the more formal it will sound. If it is shortened, it is often more casual.

What many people don’t know is that since the Japanese are quite shy, conservative people, the best way to reach out to them and be friendly with them is through greetings. It is a great way to show respect to someone and it is always respectful to acknowledge someone’s presence.

A lot of Japanese people, especially the older generations, may be quite reserved but the aura of friendliness and warmth can always change this. Simple greetings like “Good Morning”, “Good Afternoon” and “Good Evening” are great ways of brightening up someone’s day. It is a simple way of showing acknowledgment and appreciation. Cheerfulness is never frowned upon and sharing that short ray of light for someone else can always create great changes.

Even though there is a wide cultural difference between Japan and other cultures, a greeting is pretty much international. It is never offensive to greet someone a good day. However, it might be important to remember that bowing is essential in greetings as well. When greeting someone, give a slight bow even to strangers. On top f this, avoid eye contact because it is always considered rude.

In Japan, greetings are so important that it is there everywhere a traveler goes. Restaurant staff greets their customers, receptionists greet their clients, strangers bow slightly to one another as a form of greeting. The Japanese people are such respectful people that greetings are considered signs of respect.

The act of Japanese greeting is called "Aisatsu". It is the Japanese culture of greeting friends, associates, classmates, and the like. This does not only apply for morning greetings. These are expressions which are slightly shouted directly to no one in particular. A Japanese person usually says ittekimasu when leaving a house.

Although they are not talking directly to anyone, it is an announcement of taking leave. A person saying back “Itterasshai” wishes the person leaving safety. It literally translates to “take care, see you later”. These two are usual tandems in the house. Another example would be “itadakimasu” which is said before eating. It is a simple announcement that a person will start eating and asks people around them t join in. This literally means “let’s eat”. These are just some of the few interesting aisatsu that the Japanese people use in their everyday lives.

The importance of Japanese greetings

The first importance that Japanese greetings have in the everyday lives of the people is that fact that this shows politeness towards another person. May it be a convenience store worker with their customer, an employer to the employee, passers-by to a stranger. The simple acknowledgment of another person’s presence shows politeness. Politeness and respect are among the most important tenets of Japanese culture. Politeness and respect are always reflected by the use of language. The important thing to remember when greeting random strangers is to keep greetings formal, despite the age difference.

What many people find surprising about Japanese greetings is the fact that these are strongly embedded into their culture. It is taught to children at a young age, as early as kindergarten. They are taught how to properly and respectfully greet their peers and their teachers.

This is not just the classmates but it also involves peers from neighboring classrooms. They may spend quite some time greeting one another, although for the eyes of many this is unusual, for the Japanese it is common courtesy. On top of that, they are not only taught to greet their peers they are also taught to do it passionately and proudly.

Some foreigners excessively call this process as a “non-stop greeting session” that is just as crazy as a politician in campaign. But what they don’t understand is the fact that these greetings are solely intended to make others feel happy and energetic. The simple act of acknowledgment can come a long way.

In most offices or workplaces, it is a common gesture to slightly shout “ohayou gozaimasu” in the morning. It is a way of announcing one’s presence and paying respect to anyone who is already in the office. The same is done when leaving the office, where greetings are slightly shouted at no one in particular. It is a mere announcement of taking leave from the office.

A bow is one of the most important respectful gestures in Japan. It is used in every greeting and the degree and severity of the bow are usually a measure of the formality and seriousness of a greeting.

Normally, the head is used only for slight introductions and greetings. A small angled bow is used when greeting passers-by, strangers, and the like. It is also used as a means of a minor apology for causing slight inconveniences to other people. A bow that extends to the back is a formal greeting used when meeting people of importance like seniors, bosses, employees, and the like. It is a means of showing respect to the other person, and an acknowledgment of a person’s acceptance of his lower status. 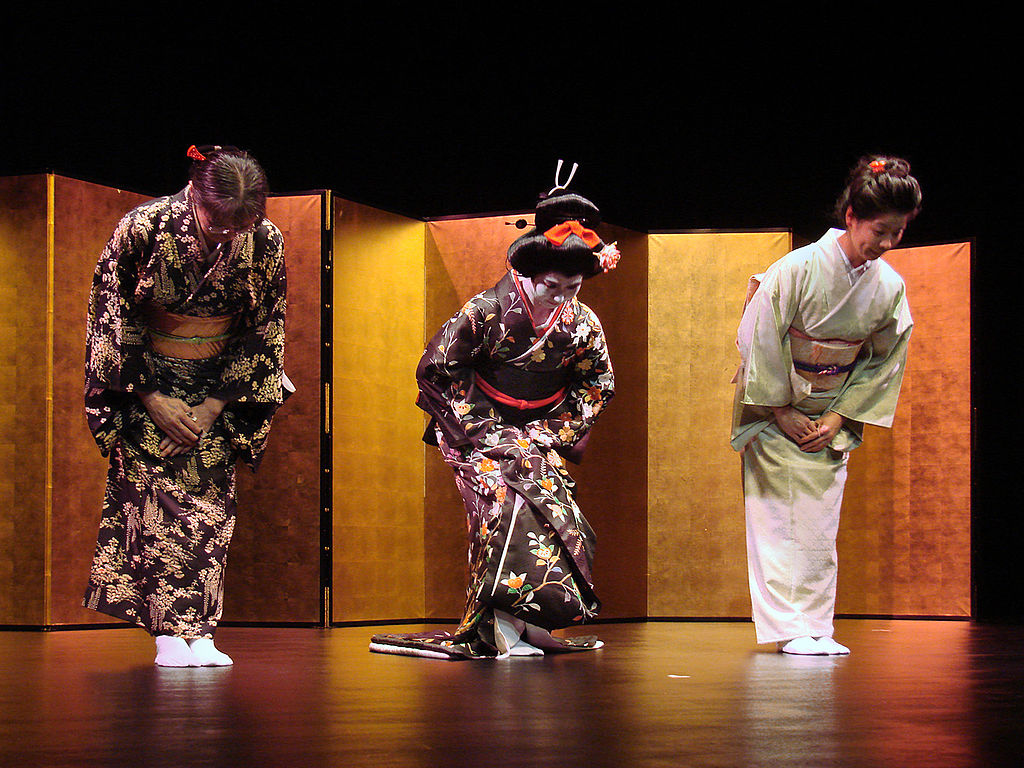 A bow that involves the entire body bent on the floor with the forehead touching the ground is a formal greeting to show extreme respect, regret, and the like. Maybe this is a way of showing deep respect for parents, grandparents, or in-laws.

Where to learn the Japanese language

For first time travelers in Japan, learning the language is not easy. Reading, writing, and speaking the language are skills which are all different from each other. Despite the fact that they are different, they are all intertwined and should be learned at the same pace.

However, it is a good idea to start learning the language bit by bit. The first things that are learned would be Japanese greetings. These, although they are simple to learn, may be the most important of all the basics that must be learned. It creates that automatic connection between the giver and the receiver of the greeting. It will automatically classify a person from being a friend and a random stranger.

There are some tutorials online that provide tutorials for basic Japanese. This is where people can learn how to ask for directions, how to say hello, how to introduce one’s self and much more. These are very important as Japanese people would appreciate a person’s effort in trying to connect with them.

For those who want further learning of the language, there are tutorial centers in Japan that provide lessons for conversational Nihongo. They will teach the student as well how to write kanji, hiragana, and katakana. Usually, for convenience, these tutorial centers are located inside malls and train stations.

Schools and academies that offer up Japanese language tutorials

There is a distinct variety of courses which are offered by these language schools to their students. There are lessons for short-term students and there are also lessons for long term students. The shortest language course lasts for about three months. This covers all the basic reading, writing, and speaking skills. The cost of this is about 150,000 yen. There are also six-month courses which offer intermediate reading, writing and speaking skills. On top of that, they offer up culture classes and Japanese language proficiency tests as well. The cost of this is about 200,000 yen.

For more advanced skills, there is one-year and two-year courses as well. This is best for individuals who plan to stay in the country long-term. They offer business appropriate Japanese that the individual can use for very formal events. These are full-time programs which are offered in many universities in Japan.

All About Renting Apartments in Japan

Saito Dosan as the Viper of Mino

The Success of Tsugaru Tamenobu

What’s True and What’s Not About Abe no Seimei