Some people travel on purpose for the sake of not just getting new experiences or seeing more of what is out there. Rather, there are certain people who travel for new tastes. One great factor that attracts tourists from all over the world is the food. Every country has its own cuisine and specialties that a lot of people are just dying to try and get a taste of. Among the many countries all over the world that boast the best and must-try cuisines is Japan.

While the country is more known for foods such as sushi, sashimi, and ramen to name a few, there are also other types of Japanese food worth trying. One of the more unusual ones on the list is Japanese beef tongue. This, of course, is not recommended for those who are weak in the stomach. On the other hand, this Japanese specialty is a must-try for people with an adventurous taste for extraordinary food.

The History and Name/Word for Japanese Beef Tongue

Also known as gyutan in Japanese, grilled beef tongue is one of the must-try foods when in Japan. The word “gyutan” is basically just a combination of two words: the Japanese word for “cow,” which is “gyu,” and the English word that is “tongue.” Literally translating to “cow tongue,” the word “gyutan” is the primary name for beef or cow tongues in Japan.

The origin of cooking beef tongue dates back to the year 1948 in Sendai, wherein gyutan was traditionally served with barley rice, pickles, and tail soup. On the other hand, when other areas in the country started cooking beef tongues, they did so with serving gyutan in yakiniku restaurants. Initially cooked with salt flavoring, gyutan was originally called tanshio in various restaurants, which translates to “tongue salt” in English. At present, gyutan is now being served with tare sauce as well.

The idea of cooking cow tongue was conceived by Sano Keishiro, an owner of a yakitori restaurant that was established in Sentai. It was his restaurant that first served gyutan. Called Tasuke, his restaurant is recognized as one of the best places in Sendai to order and eat gyutan up to this day. While gyutan was seen as an unusual dish at the time, its popularity grew throughout the country. It also helped that white collar workers that came from the Sendai area spread the good reputation of gyutan to neighboring cities.

When the import quotes for beef in Japan was lifted in the year 1991, restaurants that served gyutan received a surmountable boost in their profits and customers. This is because there is now more supply to feed the demand of customers who are craving for gyutan. On the other hand, many gyutan restaurants suffered a major blow when the Japanese government banned beef imports from America in the year 2003 due to the mad cow disease. With about 90 percent of beef tongues in the Sendai area being imported from America, there was then no sufficient supply of beef tongues. Furthermore, there are also claims that U.S. beef is best used for gyutan dishes due to its ideal amount of fat, many refused to replace it with Australian beef.

How to Make Beef Tongue Stew or Curry

There are many ways to cook beef tongue. Probably one of the most popular dishes to make out of beef tongue is either beef tongue stew or curry. The only difference between the two is the sauce to be used. Other than that, the main procedure in making both dishes is similar. In this section, one would be focusing more on the beef tongue stew recipe.

Place a large pot over medium-high heat and put two tablespoons of vegetable oil in it. Stir in one large onion, one small leek, and 2 stalks of celery, all thinly sliced. Also, add in two shredded large carrots. Continue to stir and cook the vegetables until they soften, which would take around five minutes. After which, add six ounces of tomato paste into the mix and stir until there are no more lumps and cook the mix for one more minute.

When all are cooked, add in the shredded meat into the pot, as well as the cooked liquid or reserved broth and one ounce of taco seasoning mix. Bring it all to a boil then reduce to medium-low heat. Let it simmer for about 20 to 30 minutes or until the vegetables are tender. The last step would be to season the dish with salt and pepper to taste and it is now ready to be served. This is best eaten when the weather is cold, which is in the months of January, February, and November to name a few. 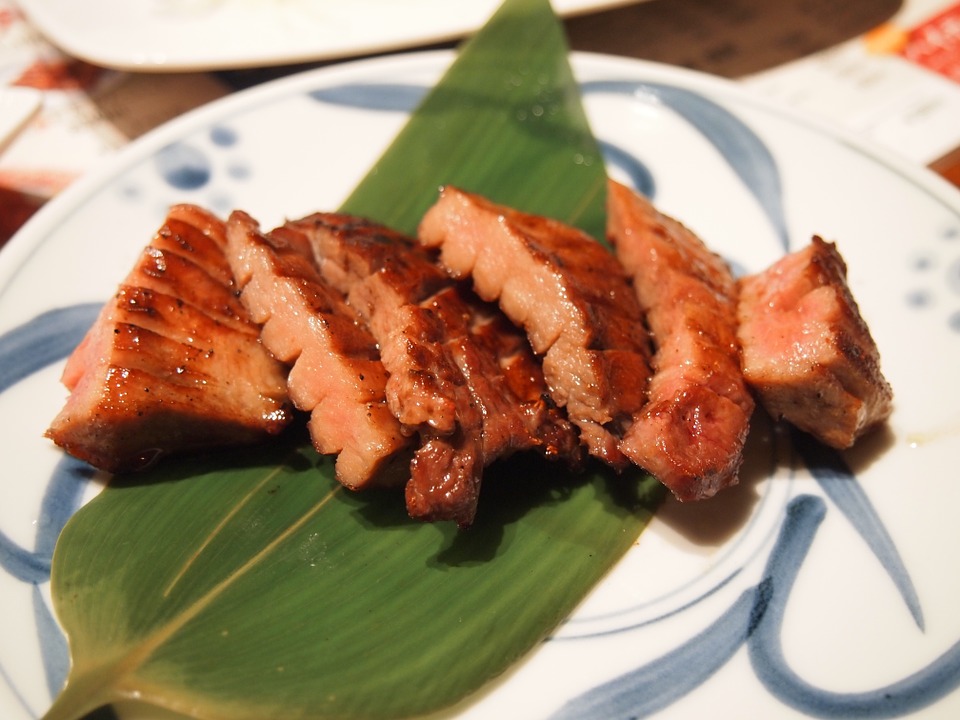 As for the simplest and probably the easiest way to cook beef tongue, it would be to grill it. With a partially thawed 1 and a half pound of beef tongue, pull the tough skin with the use of a razor sharp knife as well as vice-grip pliers to make it much easier to pull. After all the skin has been removed, put the meat back into the freezer until it is again frozen solid. Once the meat is already frozen, take it out of the freezer and stat slicing the meat as thinly as possible. The goal is to slice the meat paper thin.

After all the meat has been sliced to one’s preference, sprinkle a little bit of salt over the meat slices to give it some taste. Brush the tongue slices with sesame oil to also add a more distinct taste and aroma. The next step would be to mix together various ingredients to make green onion brushes. These ingredients include two tablespoons of rice vinegar, two teaspoons of white sugar, one tablespoon of sesame oil, half a teaspoon of red pepper or chili flakes, and a pinch of coarse of kosher salt. Toss the onion with this combination. After which, garnish the mixture with some toasted black sesame seeds.

Place a cast iron skillet over high heat. Once the skillet seems hot, place the thinly sliced beef tongue on the pan in a single layer. Brush the meat with oil while it cooks for about 30 seconds or less. Turn the slices over quickly once the bottom part is cooked. After all the slices are cooked, transfer them to a plate while one cooks another batch. Repeat the process until all the tongue slices are cooked. After which, they are ready to be served with lemon or lime wedges, along with plain white rice and pickles.

To give the dish a punch, one can also serve the grilled beef tongue with a dipping sauce. Just mix one teaspoon of miso paste, 2 teaspoons of sugar, 4 teaspoons of soy sauce, a half-teaspoon of sesame oil, and one grated small clove of garlic together and stir. Serve this dipping sauce along with the other dishes. This simple dish can be enjoyed no matter the season, with the months March, April, June, July as good options.

Spread some of the seasonings on a container wherein the meat would be marinated. Place and spread a quarter-pound of beef tongue slices into the container and make sure that they do not overwrap each other. After which, pour the remaining seasoning on top of the beef tongue slices. An option would be to grate some onions on top of the meat slices. Let the meat marinade for at least 30 minutes to let the meat absorb the seasoning.

After about 30 minutes or more, start the grill. It is preferable to grill the meat over charcoal as it gives a more distinct taste to the meat. Once the grill is already hot, start placing the meat on top of the grill and let it cook for about a minute or two. Then, turn over the meat to let the other side cook as well for another minute or two. Once cooked, serve the meat right away, along with a small size of yuzu kosho. This dish is best eaten with plain rice so one can get the full taste of the meat. With proper presentation, this dish would look good in food photos.

For a richer dish, one can just opt for braised beef tongue. While this may take a bit longer to make, the result is delicious nonetheless. The first step is to rinse 3 to 4 pounds of beef tongue and place it in a deep pot. Add water into the pot to cover the tongue by about two inches. Bring it to a boil over medium-high heat then let it simmer over medium-low heat for 20 minutes or until the tongue cooks. After which, remove the tongue from the pot and into a bowl of cold water to let it cool.

Once the tongue is already cool enough to touch, remove it from the bowl and discard the liquid. Remove the skin of the tongue, as well as any black parts, with a razor-sharp knife. Then, preheat the oven to 375F. On the other hand, heat two tablespoons of rendered pork fat or oil in an over-safe pot over medium-high heat. Add one large yellow onion that is cut into quarter-inch thick slices into the pot and let the tongue snuggle between them. Reduce heat and let the tongue brown slightly, which would take about four minutes.

Add two carrots cut into coins into the pot and stir. Pour in 1/8 cup of dry white wine into the pot and put the lid on top. Let it cook for about 6 to 8 minutes with 2-minute intervals of shaking the pot to avoid the onion and carrots from burning. After which, add another 1/8 cup of white wine, two bay leaves, 4 to 6 sprigs of fresh parsley, 4 to 6 sprigs of fresh thyme, three ripe Roma tomatoes that are cored and coarsely chopped, and a teaspoon of salt into the pot.

Cover the pot and let it cook for around 5 minutes with occasional stirring or until the tomatoes have already softened enough that it is ready to disintegrate. Add 4 and a half cups of water into the pot and bring to a boil. After which, place the covered pot into the over and bake for about 45 minutes per pound. Turn the tongue every 30 minutes to let it cook evenly.

After the tongue has been cooked, remove the pot from the oven and transfer the meat to another plate to be covered. This is to keep the tongue warm and to avoid drying. Strain the liquid and degrease it as well. Bring it to a boil and add salt and pepper to taste. Cook until the sauce becomes silky and a little bit thickened. Cover to keep the sauce warm. Slice the tongue and pour the sauce on top and it is now ready to be served. By putting garnishes, this dish would look great in pictures.

There are still other ways to cook gyutan or Japanese beef tongue, but these recipes are definitely a must-try, especially for people who love gyutan. Do not miss out on this yummy goodness especially when one visits Japan. Aside the usual sushi, sashimi, and ramen, trying gyutan is most certainly a must.

Fujiwara no Okikaze: A Waka Poet During the Heian Period

Itsukushima Shrine: The Floating Shrine on the Sea