Itsukushima Shrine: The Floating Shrine on the Sea

Japan is well-known all over the world for a lot of things such as its beautiful scenery, its snow ski resorts, and, of course, its scrumptious cuisine. Furthermore, the country is also famous for its rich culture and heritage, with many tourists from around the world visiting every year in order to experience what the country has to offer. Among the many factors that affected the culture and tradition of the Japanese are none other than the religions that developed in the country as well as the mythical beliefs that the locals have. Due to these beliefs, various shrines all over the country have been constructed as a devotion to these gods and goddesses. One of the most famous shrines in the Land of the Sun is the Itsukushima Shrine. 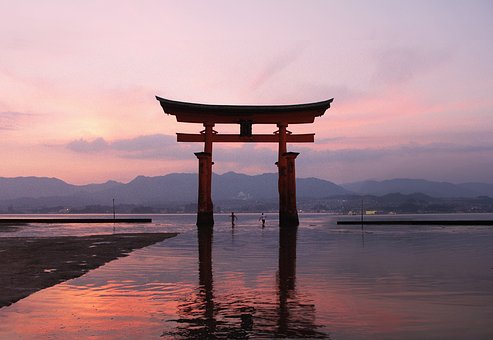 Also known as Itsukushima-jinja in Japan, Itsukushima Shrine is a Shinto shrine that is situated on the island of Itsukushima, more popularly known by many as Miyajima. The shrine is most famous for its “floating” torii gate. Located in the city of Hatsukaichi in Hiroshima Prefecture, the shrine complex is designated as a UNESCO World Heritage Site. With its many buildings and antiquities dating back centuries ago, some of them have been assigned as National Treasures by the Japanese government.

With the coordinates of 34°17′45″ North and 132°19′11″ East, the shrine is centuries old. In fact, the name, as well as the fame, of the island was based on this shrine. The formal name of the island is Itsukushima, but many prefer to call it Miyajima, which literally translates to “shrine island” in English. This nickname can be attributed to the star attraction of the island, which is the Itsukushima Shrine. Not only is the shrine famous locally but worldwide, with its “floating” torii gate as its icon.

What makes the shrine, as well as its torii gate, unique in comparison to other shrines in Japan, is that the structure was built over water. Hence, during high tide, the image of the structures depicts that of them floating in the sea. The shrine complex is comprised of several buildings. These buildings include a main hall, a prayer hall, and a noh theater stage. These buildings are supported by pillars above the waters with boardwalks connecting the structures to each other.

Located in a small inlet, the shrine is visited by thousands of tourists every year. With the torii gate set out in the Set Inland Sea, it provides a scenic view, especially during high tides and sunset. There are paths constructed to lead around the inlet, which guests can walk on while they look out on the sea. Both the shrine and the torii gate are illuminated on a daily basis after the sun has set until 11 in the evening. This offers a great backdrop for ryokan guests to have an evening stroll while wearing their yukata and geta sandals. However, visitors are no longer allowed to enter the shrine after the sun has already set for the day.

On the other hand, the illuminated island can still be viewed by guests from boat cruises. The cruises typically bring the passengers around the bay. During high tide, the passengers are also taken through the torii gate. The trip usually lasts for up to 30 minutes. It is important to note that these cruises require reservations, which can be made via the ryokans in the area or at the tourist information desk. The island itself also houses a bridge and Mount Misen.

Due to the major involvement of water for the optimum visit in Itsukushima Shrine, it is also essential to be aware of the timings of the tides. For people who wish to witness the shrine and its gate seeming to float above water, the best time to visit would be during high tide. This would also be perfect for taking a photo of the picturesque view. However, for those who wish to walk and see the gate up close, the best time to visit would be during low tide, wherein the waters drain out.

Accessibility is not a problem even though Itsukushima Shrine is located on an island. Simply take the JR Sanyo Line from Hiroshima Station to Miyajimaguchi Station, which can last up to 27 minutes. After which, just take the ferry from Miyajimaguchi all the way to Miyajima Pier, which would only take about 10 minutes. From the Pier, it is only a 10-minute walk to Itsukushima Shrine. The total trip would take about 50 minutes.

The Origin of the Famous Shrine on Miyajima Island, Hiroshima Prefecture 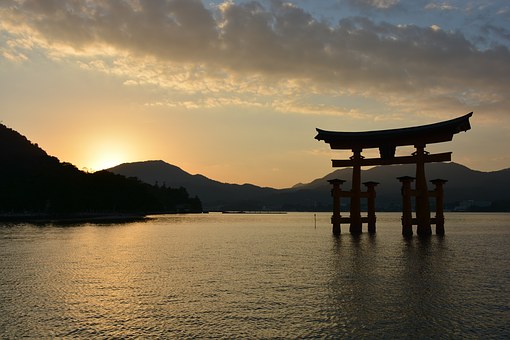 The origin of Itsukushima Shrine dates back to centuries ago. Many believe that the main shrine was constructed by Saeki Kuramoto in the year 593. History suggests that Miyajima has a certain spiritual sanctity that has been sensed by the people since ancient times, which led them to worship the island back in the day. On the other hand, the first actual record of the shrine was documented in the year 811 in the Nihon Koki, which means “Notes on Japan.”

With its main shrine building built around the year 1168, the shrine was a place of worship for the clan of Heike during the period of Taira-no-Kiyomori. The power of the clan increased through the years, which in turn also increased the number of worshippers at the Itsukushima Shrine. Due to its popularity, the shrine and its magnificence started to get the attention of the members of the Imperial Court.

The shrine became so famous that even the emperor and the Imperial Court paid visits to the Itsukushima Shrine during the Heian Period, from the year 794 to the year 1185, wherein its culture was slowly incorporated. Itsukushima Shrine continued to flourish even after the fall of the Heike clan and the rise of the Genji clan. 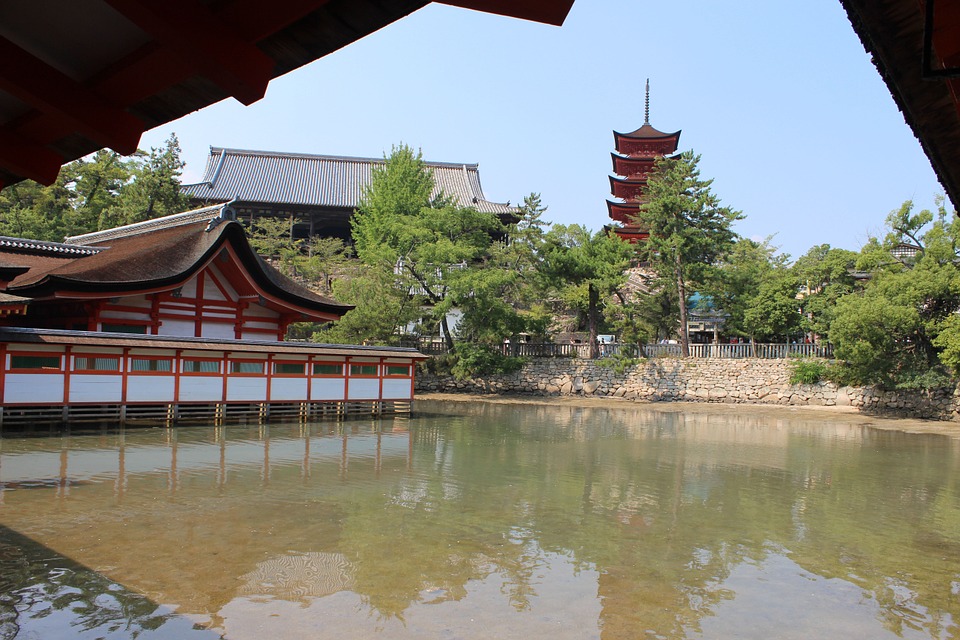 The main shrine, also known as the inner shrine, is composed of 37 buildings while the outer shrine, which is situated on both sides of the shore, is composed of only 19 buildings. The foundation of the shrine is established quite well, with the Japanese government checking its stability every few years or so. It was during the appointment of Taira-no-Kiyomori as the governor of the province of Aki in the year 1146 that the shrine gained its grandeur. The Taira clan paid homage at Itsukushima Shrine, which helped the shrine develop and become more magnificent.

An example of the Shinden style of Japanese architecture, Itsukushima Shrine is said to be the best form of this style. For those who are unaware, the Shinden style was typically used during the Heian Period. In fact, it was this style that was utilized for the construction of the residences of the Court as well as the noble class. Another prime example of this architectural style is incorporated in the Imperial Palace located in Kyoto.

On the other hand, the main shrine was built with the Kiritsuma-ryonagare style, depicted as both delicate and splendid. The folding lattice doors in the front are lacquered in greenish blue and shaped in diamonds, which depicts both elegance and grace. The current structure was built by More Motonari in the year 1571.

Key Features of the Shrine: The Torii Gate Amongst the Tides and the Island Full of Tame Deer 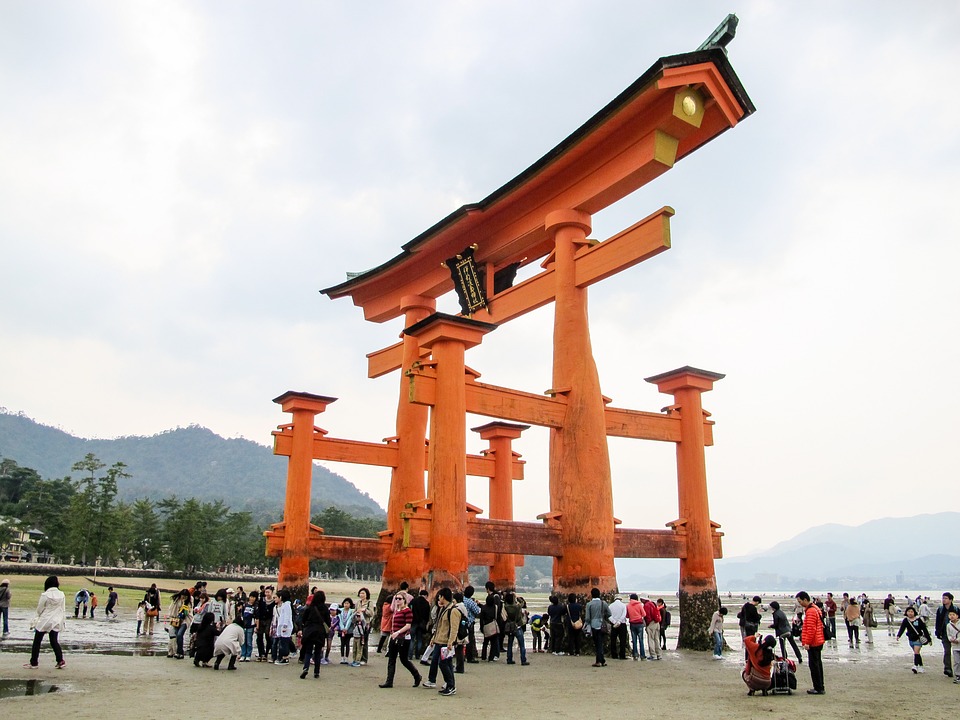 The are many features that Itsukushima Shrine has to offer. One of the places to go to when in Itsukushima Shrine is the East Corridor. Designated as a Specially Preserved Building on the 5th of April in the year 1899 and a National Treasure on the 29th of March in the year 1952, the East Corridor begins from the entrance of Itsukushima Shrine and ends at the purification hall of the Main Shrine. Laid past the Marodo Shrine and Asazaya or Morning Service Hall, the corridor consists of 108 ma, or bays between beams or pillars in English, and is 4 meters wide. Considering the buoyancy of the high tide, slight spaces were made between the floorboards of this corridor.

Next stop would be the Marodo Shrine. Designated as a Specially Preserved Building on the 5th of April in the year 1899 and a National Treasure on the 29th of March in the year 1952, the Marodo Shrine is the largest sesshas in Itsukushima. Sessha basically runs second to the rank and size of the main shrine. Another name for sessha is an auxiliary shrine or temple. The purpose of a sessha is to be devoted to a deity that holds an important relationship with the god or goddess of the main shrine.

Another key feature of Itsukushima Shrine is the Kagami-no-ike. Also known as Mirror Pond in English, the Kagami-no-ike is one of three round ponds that surround Itsukushima Shrine. It is located near Marodo Shrine and is considered as among the eight known views of Miyajima. It was said that the reflection of the moon on the Mirror Pond was a mesmerizing view, which was denoted in various tanka and haiku.

Also designated as a National Treasure by the Japanese government, the Purification Hall is also one of the must-visit places in Itsukushima Shrine. It was utilized for festivals that were held on a monthly basis as well as for Bugaku, also known as Ancient Court Dance in English, performances during the rainy season. An architectural technique that was utilized in building the Purification Hall was cutting and elevating the central part of the front eaves, which was typical during the late Heian Period.

The highlight of it all is, of course, getting to witness the beauty of the “floating” torii gate. Whether it is during high tide or low tide, being able to see this view, especially during sunset, is one of the most spectacular sceneries that one could ever witness. If one would be staying the night, the island houses a number of hotels that one can sleep in. Filled with not just beauty but also history and culture, Itsukushima Shrine is truly a must-see and a must-visit for people who are looking to be exhilarated. Itsukushima Shrine should definitely be a part of one’s bucket list when traveling to Japan as its beauty is incomparable.