Tokyo Station: The Busiest Station in All of Japan

When going to Japan, probably the most visited area ever is the Tokyo metropolis. Highly developed and urbanized, the metropolis is very popular not just among the Japanese but also among foreign tourists. Within Tokyo lies the most updated electronic stores, historical shrines, and high-end shopping malls. There are also shopping districts within the area that is perfect for people in need of some retail therapy. Among the most visited places in Tokyo is the Tokyo Station. 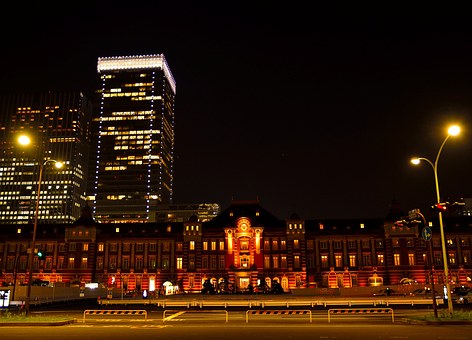 Also known as Tokyo-eki in Japanese, Tokyo Station is a railway station situated in, of course, Tokyo, Japan. Located in the Marunouchi business district in Chiyoda, Tokyo Station stands near the grounds of the Imperial Palace as well as the commercial district of Ginza. As the main intercity rail terminal in the metropolis, Tokyo Station is served by Shinkansen high-speed rail lines.

Aside from being a railway station, Tokyo Station is also a primary intercity bus terminal. For regular midday time, there are services to many cities located in the Kanto region. As for people traveling at night, there is overnight service to the Kansai region as well as to the Tohoku region.

Station Layout of the Busiest Railway Station in Japan 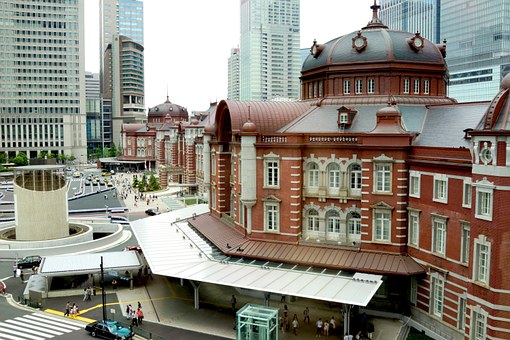 The facade on the western side of the main station was built using bricks. This facade has been present since the year 1914. The main station is comprised of ten island platforms that serve 20 tracks, elevated above street level and runs in the north-south direction. The primary concourse operates beneath the platforms in the east-west direction. The Shinkansen lines are located on the east side of the station, also called the Yaesu side, coupled with a Daimaru department store.

Several platforms and tracks can also be found underground. There are two Sobu/Yokosuka line platforms that serve four tracks to the west of the station and two Keiyo line platforms that also serve four tracks to the south of the main station. The first line is located five stories below ground level while the second line is located four stories below ground level. There are also moving walkways underground that serve as a connection for passengers switching trains. Other underground passageways can also be found, which are used to connect to commercial buildings and shopping centers that surround the main station.

There is a line numbering system that corresponds to the lines that serve the Tokyo Station. These numbers have been altered through the years, but the current one has been effective since the year 1997.

From and To: Commuting Between Tokyo Station and Narita Airport

Visitors who would like to travel straight from Narita Airport to Tokyo Station can do so. The transportation system in Japan is so developed that despite the distance, it is entirely possible to commute from the airport to the station. If one is on a budget, the option would be to catch the cheapest train that would bring one from Narita Airport to Tokyo Station or vice versa. However, since it is only a regular train, bringing one’s luggage to commute, especially during peak hours, may prove to be a challenge.

Upon arriving at the Narita Airport, the first step would be to look for the Keisei Narita Limited Express. Look for the signs that state “Railways” then go to the lower level by taking the escalator. Next up would be to look for the blue Keisei Line. Purchase a ticket to Tokyo, but not on the Skyliner. If one would be staying for a few days in Tokyo, one may opt to get a Pasmo card, which is a top-up card that can be used on all trains and buses in Tokyo.

After purchasing, pass through the two ticket barriers and go down the stairs to get to the Keisei platform. Get on the train and get off at Nippori Station. From there, take the JR Yamanote Line Platform 10 to get to Tokyo Station.

Shopping When in Tokyo Station

There are many things that one can do when in Tokyo Station. Among the top things to do would be shopping. There are various shopping malls and centers that surround Tokyo Station, welcoming locals and foreign guests into their store. One recommendation would be Nihonbashi Takashimaya. A classic Japanese department store standing near Tokyo Station, this is a must-visit for shopaholics. Their B1 food floor has a plethora of restaurants and other choices to choose from. Even their B2 floor also consists of great restaurants that are must-tries. Clothes from both local and international brands can also be found here.

For the bookworms, the best place to head on to is Maruzen. A bookstore located near Tokyo Station, several books from different genres can be found here. While it is a Japanese bookstore, it also offers English books, which can be found on the 4th floor. If one would like to sit down and read while enjoying a cup of coffee, their 3rd floor houses a nice cafe.

As for the people who love cooking or just kitchenware in general, the place to be would be Kiya Knife Shop. Well-known and well-made Japanese cooking knives, as well as other cooking equipment, can be found in this store. A great cook knows just how important it is to have the right tools when cooking. These items would work great as souvenirs or as gifts for cooks. Just do not forget to place them inside one’s checked in baggage.

If one is a fan of either Japanese characters or just all things cute, head on over to Tokyo Character Street. A character shop situated near Tokyo Station, this store has a lot of kawaii things to offer to its customers. They offer various characters items that can be collectibles or gifts to friends who are also into cute stuff.

Looking for a hot cup of green tea? Check out Ippodo Tokyo Store, a popular green tea shop based in Tokyo. A branch of this shop opened near Tokyo Station. Offering the finest tea one could look for, their items would be great as a gift to friends and family who enjoy tea. It can also serve as a souvenir for one to drink when one is back at home and missing Japan. There is also a cafe next to the store, which serves great food. 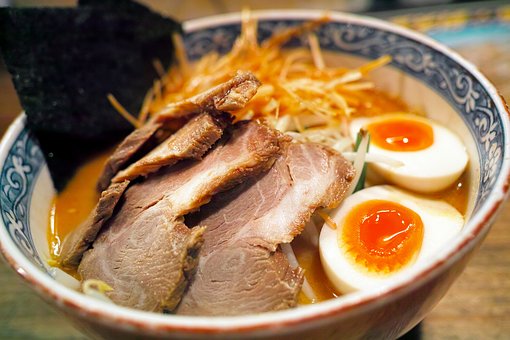 For ramen lovers, the good news is that there is an actual ramen street just near Tokyo Station. The street is comprised of various ramen restaurants that offer a wide range of ramen broths and noodles. Among the best ones out there would be Rokurinsha. Specialized in making tsukemen, a Japanese dipping noodle dish, the restaurant is popular with the locals and usually has long lines. Their rich pork broth and seafood broth are simmered for more than 10 hours to attain the richness and full flavor of the base.

Mentored by the creator of tsukemen itself, Kazuo Yamagishi, Ryosei Mita opened this restaurant and maintains the high standards of their dishes. The demand is so high that there are even frozen ramen that can be bought just across the restaurant for those who cannot wait in line. Their bestselling dish is the Tokusei Tsukemen, which costs around 1,050 yen.

This restaurant also has branches in Haneda  Airport, in Osaki, and near Skytree. The restaurant near Tokyo Station has two types of menus, namely, the breakfast menu and the regular menu. The breakfast menu is available from 7:30 until 10 in the morning while the regular menu is available from 11 in the morning until 11 in the evening.

As for the people who are fans of pork broth, another great restaurant would be Oreshiki Jun. Gaining popularity in the tonkotsu ramen crowd, this restaurant is a part of the Setagaya Ramen group. With a very rich and delicious broth, the restaurant has attained some regular fans through time. When ordering, customers are made to choose the firmness of their noodles, rating from 1 to 5. This way, they would be able to fully enjoy the type of ramen that they like.

Their chili oil is also quite famous, as it is composed of 18 ingredients that make the oil quite flavorful and able to lift the richness of the broth. They also offer other kinds of dishes such as dumplings, rice bowls, and curry. Open from 10:30 in the morning until 11:30 in the evening, the last order accepted is only until 11 in the evening.

For a healthier bowl of ramen, check out Tanmen Tonari. The restaurant serves Tokyo-style tanmen. Topped with 350 grams of stir-friend seasonal vegetables, this dish is definitely packed with nutrients. With this amount of food, it may take more than a few minutes to finish this meal. While ramen, in general, is not exactly the healthiest to eat, this dish contains the same amount per day as recommended by Japan’s Ministry of Health. Every bowl contains ten various vegetables. These include carrots, cabbage, and bean sprouts. Even though it is a healthy choice, the tanmen still remains flavorful and tasty.

They also offer other dishes, though they might not be as healthy as the tanmen. This includes their karaage, which as a Japanese-style fried chicken, that is also quite popular among their customers. To get both the tanmen and the karaage, one can order the Tankara set, which only costs 880 yen. Adults should make sure there is much room in their stomach for this set though the amount of food may be too much for children. Open from 10:30 in the morning until 11 in the evening, the last order taken is at 10:30 in the evening.

Other Restaurants to Check Out When in Tokyo Station

There are also other restaurants that one can try when on a trip in Tokyo Station. If one is craving for Hokkaido cuisine, Kushiro is a good option. An izakaya, this restaurant is located on the 6th floor of the Kitte Building. It is only 100 meters away from Tokyo Station by taking the Marunouchi South Exit. Hokkaido cuisine and sake are the best dishes to order. Other recommendations include Birdland for yakitori and Hidemi Sugino for pastries and cakes. Some restaurants also offer sushi.

There are definitely a lot of things to see and do when in Tokyo Station. The main station in itself can already render one in awe due to its architectural style. An added bonus would be the great places that one can access and enjoy upon arriving at Tokyo Station. There are plenty of options to choose from ranging from department stores to restaurants. Tokyo Station can certainly be a haven for people who like to explore and discover new things.

Get To Know the Paradise that is Ishigaki Island