Ajisai: The Japanese Flower During the Rainy Season

Nature is one of the selling points of Japan when it comes to tourism. Be it summer, spring, winter, or fall season, the country always has something to offer to tourists. One of the sought-after seasons would be the spring season as it is the time for the blooming of cherry blossoms. More commonly known as sakura in Japanese, this flower is highly popular not just among the locals but also foreigners as well. However, other kinds of flowers do not fall short of the sakura as they are also beautiful in its own way and special in the Land of the Sun. Come rainy season, the most popular flower in the country would be the ajisai flower.

Basic Facts and Features of the Ajisai Flower in Japan 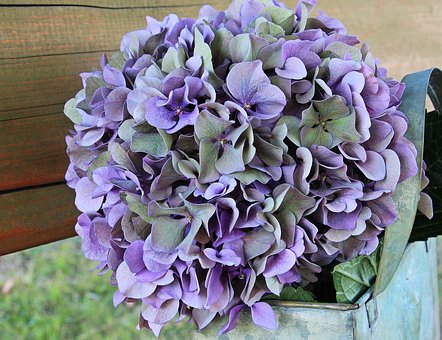 More commonly known as hydrangea around the world, the ajisai flower signifies the ending of the rainy season and the coming of the summer season in Japan. Similar to the flowers ume, irises, and sakura, the ajisai flower is also highly adored by the Japanese people. Probably one of the many reasons for this adoration is the fact that the flower was actually first discovered in the Land of the Sun. On the other hand, the flowers are also popular in other countries such as mainland China.

Just like sakura-viewing, there is also a Japanese tradition of viewing ajisai flowers during its blooming season. The blooming season of ajisai flowers typically begins in early June and ends in mid-July. Sadly, foreign tourists visiting in April may not be able to watch these flowers bloom. There are various kinds of hydrangeas that bloom during this season. Flower or nature enthusiasts commonly wait for this season to catch the beauty of the ajisai flowers amidst the rain and gloomy season that is just about to end.

Also known as hydrangea macrophylla, ajisai flowers come in various kinds and colors. These different hues of leaf-looking petals include white, dark blue, green, light pink, blue, blue green, and purple in a bundle of flowerheads. The color of the ajisai flowers depends on the acidity level of the soil as well as the rains. Hence, in order to achieve a certain hue, gardeners must adjust to the type of soil wherein the roots of the flowers are buried.

Despite the common notion that flowers are typically fragrant, this is not always the case when it comes to ajisai flowers. There are some that give of a light scent while there are others that give off no scent at all. Usually, the scent just depends on the type of ajisai flower. Worry not as the land of Japan grows around 70 species of ajisai flowers so there are definitely a lot of choices to choose from and smell.

On the other hand, there basically just two main types of ajisai flowers. The first type is round while the second type consists of flat heads. While ajisai flowers have a specific color, this hue can actually change over a period of time. Hence, a pink ajisai flower now can turn into a purple ajisai flower after some time. Another fun fact about ajisai flowers is that one young plant is able to produce varying hues of blossoms.

The Significance of the Ajisai Flower in Japanese Culture 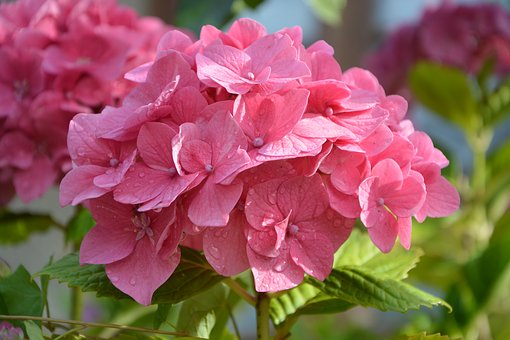 As the land where the ajisai flowers were first discovered, it is no wonder that this type of flower is held at a great value in Japan. Various types of ajisai flowers grow in temple grounds and parks during its blooming season. It has become a tradition not just to grow it in certain places but also to watch it bloom when the time is right.

A common prayer relating ajisai flowers to the rainy season is usually said by the locals who love hydrangeas. They pray for the rains not to cease until the ajisai flowers have come into full bloom. This is because the more rain that the flowers attain, the healthier the flowers get. Hence, its beauty multiplies as much as it rains. Also known as nanahenge in Japanese, this nickname translates to seven transformations.”

The history of ajisai flowers was said to have begun in the Nara period, from the year 710 to the year 794, wherein the flowers were mentioned in poems. However, the beauty of this flower was commonly neglected by the Samurai despite its changing colors during the Edo period, from the year 1618 to the year 1868, due to the notion of the flower’s immortality. Nonetheless, the common folk grew to love and adore the beauty of ajisai flowers later on.

Ajisai flowers hold deep meaning in the Japanese culture. With its changing colors depending on the environment and the rain, many believe that the ajisai flowers symbolize inconsistency and immortality. On the other hand, there are others who find the flowers to be a symbol of sadness in terms of how impermanent things can be. However, a cluster of ajisai flowers denotes family bonds, undying friendships, and lasting love.

The craze on ajisai flowers has grown into popular culture these days. There are now various accessories that go with the hydrangea theme. The flowers also serve as a decorative motif in many arts and crafts such as paintings, jewelry, woodblock prints, and tableware. Some kimonos also incorporate designs with hydrangea themes. Various paintings and Japanese literature, even those hailing from the mid-Edo period, incorporate the beauty of these ajisai flowers.

Events that incorporate ajisai flowers as a theme include outdoor tea ceremonies, photo sessions, photography contests, haiku competitions, and music and dance performances. Despite the cloudy weather, the locals still get to enjoy these occasions. However, there are times that these events get postponed due to inclement weather. Nonetheless, these occasions are always anticipated every year. 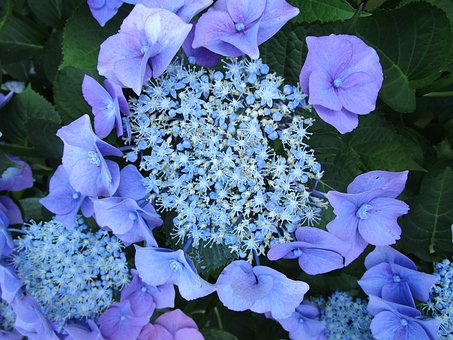 Certain places in experience the rainy season in varying months. That means that the best place to view the blooming of ajisai flowers change depending on the month. If one would like to watch it early, one may do so from early June to mid-June. A good spot to check out for the blooming of hydrangeas at this time would be Fukuoka City Botanical Garden. Opened in the year 1980, this garden is the biggest one in the city of Fukuoka. It features open fields as well as greenhouses. The garden houses around 3,000 types of plants.

As for the hydrangeas, this garden contains about 90 kinds of ajisai flowers. Hence, for people who wish to explore and compare the different varieties of hydrangeas, this is a good place to start. Located in 5-1-1 Ozasa Chuo-ku, the garden is open from 9 in the morning until 5 in the afternoon. The garden is closed on Mondays except if it is a holiday. Admission to the garden costs 600 yen for adults and 300 yen for high school students. Admission is free for junior high school students and below as well as 65 years old and above.

For people visiting in June, another place to check out would be Nokonoshima Island Park. With a thousand plants in the park, many locals and even tourists visit the place every year. Access the park by taking a ferry from Meinohama, the trip of which would last only about 10 minutes. The plant species in the park can grow as tall as a normal human being. It also features a hydrangea road that is 100 meters long.

Cutting workshops are also available in the area during weekends. Open everyday of the year, the place is a haven for people who love ajisai flowers. The garden is open to guests from 9 AM to 5:30 PM from Monday to Saturday and from 9 AM to 6:30 PM on Sunday. Admission costs 1,200 yen for adults, 600 yen for high school students, and 400 yen for kindergarden students.

On the other hand, for people who would be visiting in late June or early July, the place to check out would be Uminonakamichi Seaside Park. Aside from its beautiful seasonal flowers, the park is also well-known for its facilities like a zoo, an aquarium, and a hotel. With an area of approximately 290 hectares, the park is great for couples and families. The park features the “Ajisai Path,” which consists of about 10,000 hydrangeas for people to enjoy. Rain lilies and water lilies accompany these ajisai flowers, adding to the beauty of the path.

Open from 9:30 in the morning until 5:30 in the afternoon, the park has no closing days. Located at 18-25 Oaza Saitozaki, Higashi-ku, admission cost varies depending on the individual. Adults shall pay 410 yen per head while high school students enjoy a discounted price of 80 yen. 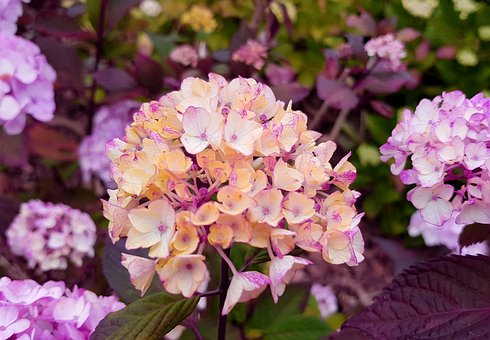 A place specially dedicated to ajisai flowers goes by the name of Hydrangea Garden. Also known as Ajisaien in Japanese, this garden consists of around 10,000 ajisai flowers from 150 varieties. Though ajisai flowers come in different colors, most of the flowers in this garden are blue in color. Vibrant even during the rainy and gloomy weather, these flowers are visited by a lot of guests every year during its blooming season. News about its beauty has traveled even outside Japan.

Located at 3-25-1 Koyama, Nerima-ku, Tokyo, the garden is accessible from Toshimaen Station in Nerima ward, Tokyo. It only takes about a minute to walk from the station to the garden. Traveling from Ikebukuro, the trip only takes about 12 minutes going to Toshimaen Station. Toshimaen Park is also a famous attraction, especially for people who reside in the western portion of Tokyo and Saitama. The park is also considered as among the oldest ones situated in Tokyo.

One of the most anticipated events held in Toshimaen is the Annual Hydrangea Festival. Hosted by Toshimaen Park, this festival is held in the month of June every year. Aside from the beautiful features of ajisai flowers for the guests to enjoy, there is also a miniature train that goes around the park. Known as the “Ajisai-go,” which translates to “Hydrangea car,” this train lets visitors enjoy the view of the hydrangeas while circuiting the amusement park.

Recognized as the primary attraction of the park, the Hydrangea Garden consists of various sections. There are a number of valleys filled with vibrant globes of hydrangeas, giving a picturesque view. The park also features a flower tunnel that is 20 meters in length, which lets guests go to various parts of the park. There is also a traditional Japanese pavilion wherein one can enjoy a scenic view on the roof. At night, some ajisai flowers are illuminated to provide a romantic vibe.

A steam locomotive train is also available for guests who do not wish to walk around the park. The train takes a tour around the area, which also gives a different view in comparison to walking around the park. However, a ride on the train would cost 300 yen, which is really not that bad to save guests from aching feet. The state of the flowers are best watched during blossom season.

The best time to visit the garden is at the end of the rainy season. However, the weather can sometimes be a bit unpredictable. Even if the weather forecast indicates that there would be no rain on a certain day, it would be best to still bring an umbrella just in case there is a sudden downpour. Still, the beauty of the ajisai flowers shines through the gloomy weather.

Other places to check out for hydrangea viewing aside from this garden are Meigetsu-in Temple, Hakone Tozan Railway, Mount Tenjo, and the Ajisai Festival in Wonderful Nature Village, Tokyo. While cherry blossom viewing is more famous all around the world, watching ajisai flowers bloom during the end of the rainy season is just as beautiful. Something about its vibrant hues amidst the dark, gloomy weather provides that brightness that is better appreciated under the dark skies.