Kyaraben: Show Your Artistic Side in Making Character Bento

It is typical for people in Japan to bring lunch boxes to school or work. While they do have the option to buy food from convenience stores and fast-food restaurants, nothing beats the effort that someone took in order to prepare a lunch box. Some even bring bento boxes to their school or work. This is because bento boxes provide more choices of dishes that one can eat. There are various types of bento boxes. Probably the most popular bento recently is character bento.

What is A Kyaraben or Character Bento?

More commonly known as kyaraben or charaben in Japan, character bento is basically a style of bento that incorporates dishes that are elaborately designed or arranged. These foods are made to look like characters or people. It can be plants, animals, and even anime characters. Japanese homemakers actually take the time and effort to prepare and arrange these lunch boxes so as to encourage their loved ones to bring bentos to school or work. One would definitely not be able to help but smile upon opening a lunch box with foods shaped like characters.

At first, kyaraben was made in order to gain the interest of Japanese children when it came to their food. With foods decorated as various characters, homemakers hoped to encourage their children to be open to eating a wider range of food choices. However, due to its cuteness and artistry, kyaraben has now become a national phenomenon. There are now national contests in Japan that focus on kyaraben.

Aside from its decoration and colorfulness, kyaraben also typically consists of foods that are high in nutrition, depending on what one puts in the bento boxes. As it is put in a bento, the foods inside typically are made with a wide range of ingredients. Cute animals and plants with eyes and mouth are often depicted in foods in kyaraben. Sometimes, these foods are also arranged so as to depict a scenery.

Coming up with new ideas for bento has always been constant in the Land of the Sun. Japanese moms would make sausages shaped like an octopus in order to amuse their children upon opening the bento. Patterns and pictures are also depicted by putting dried seaweed, also known as nori in Japanese, on top of white rice. Today, Japanese housewives take photos of their kyaraben and post it online for the world to see and appreciate.

It has become so popular that there are now books being published that center on the art of kyaraben. Kyaraben contests are now also being held in certain parts of the country. There is a criterion for judging the success of making kyaraben. This includes the level or difficulty of design as well as the nutritional balance of the meal. With this, one can see that physical appearance is not the only thing that matters in making kyaraben but nutritional value as well.

While the typical designs in kyaraben include famous characters, some people have also gone so far as to depict seasonal motifs, customs, and even festivals. The art of making kyaraben can take such a long time as its preparation is highly meticulous. This is especially true when using tiny ingredients such as ears or noses of characters using nori. The goal is to make the meal look like it came from a picture book.

The peak of popularity of kyaraben was around the year 2007 with TV programs and magazines holding special features of kyaraben. Now, people are practicing their skills in making kyaraben by creating more and more complex designs. Now, there are a lot of kitchen equipment that is not just dedicated to cooking but for actually preparing kyaraben. This includes molds for rice to look like cartoon characters. To promote Japanese food to the entire world, the Japanese government even held a kyaraben contest in the year 2014.

Kyaraben may be challenging to make without the proper tools that one needs. There are various bento tools that one can purchase from the grocery store and even bookstore to help with preparing a kyaraben. Typical tools include rice molds, stencil plates, vegetable cutters, nori hole punches, silicone cups, and bento picks. Worry not as these bento tools are very affordable. With these, one can have an easier time making kyaraben.

The most important thing that one needs in order to make a kyaraben is, of course, a bento. Without a bento box, one cannot exactly make a kyaraben, as the word itself translates to “character bento.” There are one-tier, two-tier, and even three-tier bento boxes. For a more special bento box, one can buy thermal food containers to ensure that the food will be able to stay warm for a number of hours. Bento boxes have various shapes and sizes so one may take one’s pick.

Several Japanese bento boxes are typically separated by their capacity or the volume that they are able to hold. This volume is usually provided in milliliters (mL). It is said that the capacity of the bento box generally equates to the number of calories it can hold. This means that a bento box with a capacity of 600 mL can roughly hold food with 600 calories. For people who are on a diet, this estimation may prove to be quite useful when measuring the calorie intake.

Another important thing to take note of when choosing a bento box is the lid. Make sure that the bento box has a tight lid to ensure that arranged food inside the lunch box would not spill out or rearrange when inside one’s bag. Furthermore, look for a bento box that can be easily opened and closed if it would be used by children. This is just so that little kids would not have to spend so much time opening their lunch boxes or having their food spill inside their bag because the bento box was not closed properly.

One other important bento tool in making kyaraben is a cutting board. This is essential in making kyaraben as there would be a lot of cutting of foods in preparing the cute meal. Having several boards would be best so as that one may split cutting different kinds of food such as meat, vegetables, and fish. The cutting boards may also be used as a base where one can put parts of the characters in prior to placing them inside the bento boxes.

With a cutting board, one would also need a knife to cut ingredients. Knives are a staple in the kitchen but having different sizes would definitely be useful when making kyaraben. Having knives that would work great with all types of fish, meat, and vegetables would certainly be helpful. A paring knife is also essential for when cutting small foods used for decoration.

A pair of scissors is also important when making kyaraben. Cutting parchment paper, nori, and plastic wraps are done by using scissors. It would be better if one also has small curved scissors so it would be easier to cut nori into curve shapes. Another pair needed when making kyaraben is tweezers. This is used for picking up and placing tiny parts of characters into the bento boxes. These tiny parts include sesame seeds and nori parts. Other items to include in the list are plastic wraps, straws, and bottle caps.

There are several recipes that one can try in order to make kyaraben. Among the cutest ones out there is on how to make hedgehog pork floss bun. Aside from its cuteness, this recipe is a must-try because of how yummy this is.

The first step in making this dish is by mixing 200 grams of bread flour, 1 tablespoon of sugar, one teaspoon of salt, 5 grams of corn syrup, 5 grams of instant yeast, and 140 grams of milk in a large bowl. Combine all these ingredients together to make a dough. Add in 10 grams of unsalted butter at room temperature into the dough and knead until it becomes soft and springy. This may take about 10 minutes to accomplish. Should one have a bread maker, one may opt to use this instead and select the dough function.

After which, use cling wrap to cover the dough and let it sit in a warm place for the dough to rise. After about an hour, the dough should already have risen and grown twice its original size. Conduct a finger test to ensure that the dough is ready. If it is, take out the dough and place on a hard, flat surface. Punch the dough with one’s fist in order to take out the air from the dough. Then, roll out 13 portions of 25 grams each of the dough from the bulk. Form each portion into balls, cover with either cling wrap or a damp cloth, and set aside.

After about 5 minutes, roll out the 12 portions of the dough and roll them again into balls. Grease two round pans sized 14 inches and put an overturned ramekin on the center of each pan. Place 6 portions in each pan and ensure that these are spaces between one another to let the dough expand. Cover the pan with either a damp cloth or cling wrap for 40 minutes to let the dough proof.

After baking, let the bread cool down. In the mean time, mix 3 tablespoons of condensed milk, 9 tablespoons of Japanese mayonnaise, and 1 tablespoon of corn syrup in a bowl to make the mayonnaise coating. Spread the mayonnaise on the parts of the break where floss would be put on. After which, place the pork floss on top. Use chocolate pen and chips to draw on the features of the hedgehog. To give it a blush, just use a pink food marker.

Making Baymax German Cookies to Put in A Kyaraben 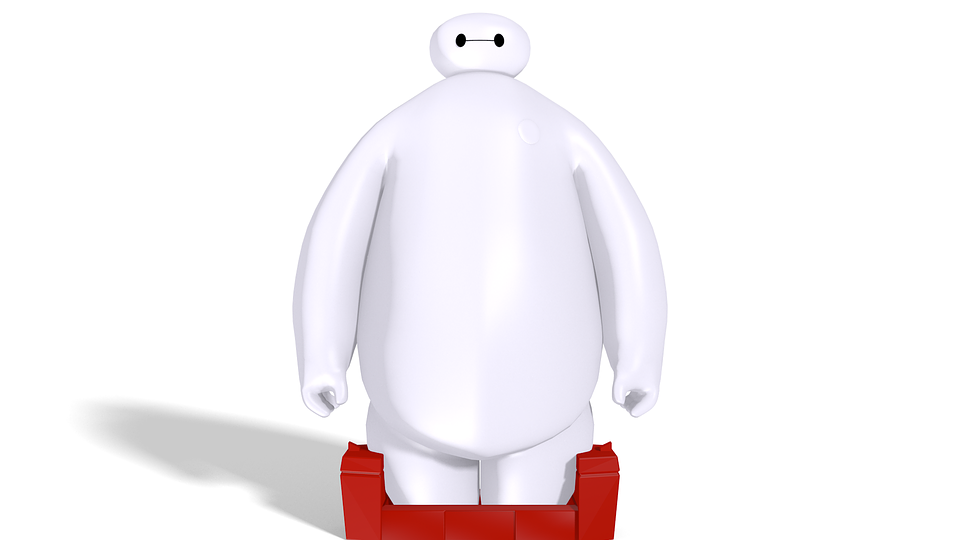 As for Baymax German cookies, the first step to making this is by beating 125 grams of butter and 50 grams of icing sugar together until the mixture is light and fluffy. The next step is to sift in 125 grams of potato starch and 80 grams of cake flour into the mixture and combine all together to make a soft dough. Scoop out about 3 tablespoons of the dough to be mixed with charcoal powder until the dough turns black. Wrap both doughs separately with cling wrap and place them in the refrigerator for about half an hour.

After which, remove the white dough from the fridge and mold into two balls. One ball is for the head while the other one is for the body, so the latter dough should be a bit bigger than the former. About 8 grams of dough shall do for the body and 6 grams for the head. This measurement is just to maintain consistency to the corresponding body parts of the cookie.

The next step would be to mold the arms and legs of Baymax and stick them together with the body. Remove the black dough from the fridge and roll two small portions to make the eyes of Baymax. Roll out another portion of the black dough into a thin strip for the mouth of Baymax. One may add some heart-shaped sprinkles to add cuteness to the cookies.

After preparing the whole face and body of Baymax, bake these cookies in the oven at 130 degrees Celsius for about 25 minutes. Some cookies have a tendency to crack. To avoid this, place the cookies on the middle or low rack while placing another empty tray above.