Nihonbashi: Heading to the Center of Tokyo, Japan

Probably the most visited place in all of Japan is Tokyo. Being the capital of the Land of the Sun, Tokyo is the most popular place in the country, with its electronic stores, shopping malls, and everything in between. The metropolis is huge, with various districts and towns that are also popular in their own right. With the metropolitan being so big, one might wonder where the center of it all is. The answer to that is none other than Nihonbashi.

History and Development of Nihonbashi in Tokyo, Japan 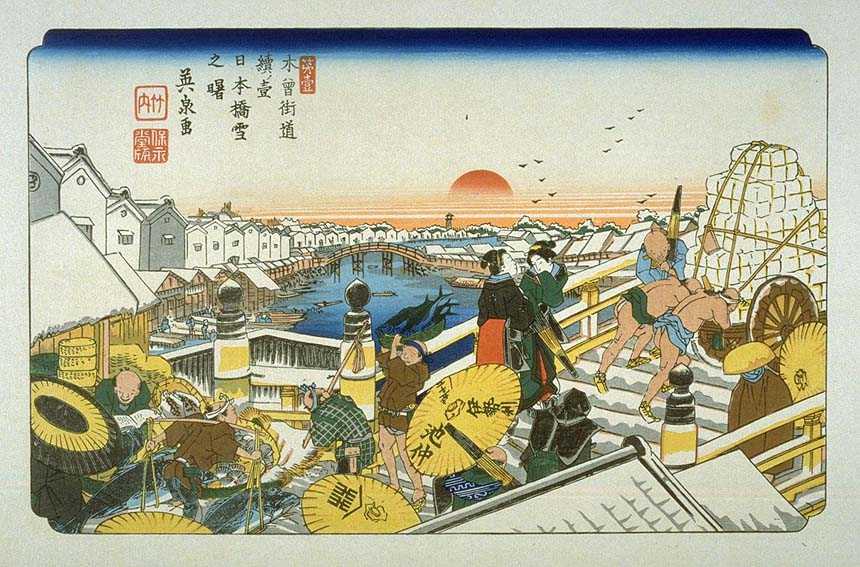 Literally translating to “Japan Bridge,” Nihonbashi is known as a business district located in Chuo, Tokyo. The district developed around the bridge bearing the same name. The bridge has served as the connection between the two sides of the Nihonbashi River since the 17th century. It was in the year 1603 that the first wooden bridge was finished.  However, the present bridge made of stone on a steel frame dates back to the year 1911 and was designed by Tsumaki Yorinaka.

A huge area to the north side and east side of the bridge is covered by the district. This area reaches Akihabara to the north and the Sumida River to the east. To the west lies Otemachi while to the south lies Yaesu and Ginza. The city district is also located northeast of Marunouchi as well as the Tokyo Station. The well-known bridge has served as the kilometer zero marker for the national highway network of the country since the early stages of the Edo period.

It was during the Meiji period when the bridge was reconstructed to be made in stone. In the 1960s, the bridge became covered by an expressway. A partial 1:! Replica of the original bridge made of wood can be found in the Edo-Tokyo Museum located in Ryugoku. In addition, a replica half its size can also be found in Haneda Airport where the bridge links the fourth floor and the fifth floor of the International Terminal.

Being known across the country as the “center of Japan,” the city district has attained commercial prosperity through the years. Numerous shops line the streets and the shipping canals of the area and have flourished thanks to the nickname of the district. Some of these shops have history that date back centuries ago and are still operating in the district up to this day.

One of the most powerful and influential merchant families in Japan, the Mitsui family, opened a textile shop in Nihonbashi during the Edo period, which was from the year 1600 to the year 1867. Highly successful, the textile shop was named the Echigoya. Succeeding its place is the Mitsukoshi Nihonbashi, which is the first department store in Japan. Until today, this department store still stands at the center of the district.

The district of Nihonbashi has undergone some redevelopments through the years. One of its highlights is the Coredo Muromachi complex, boasting three beautiful skyscrapers. These skyscrapers offer shopping and dining experiences to customers. They were also designed in a fusion of modern and traditional style as inspired by the heritage of the merchant district during the Edo period. Several of its shops offer traditional crafts or locals foods known in Japan.

Shopping in the Streets of Nihonbashi, the “Japan Bridge”

Being the first department store established in the Land of the Sun, this department store is highly popular among the locals. It has survived through the good and bad times of the economy. Completed in the year 1935, the flagship store has seven stories. It was designated as a historic structure in the year 1999. A ten-story annex building was built right next to the department store with direct connections between the two on a few floors. Because of its enormity, it is entirely possible to spend the whole day just shopping in this department store. It is also important to note that most of the stores in this building are high-end.

Located in front of Mitsukoshimae Station, Mitsukoshi Nihonbashi was formerly known as Echigoya back in the year 1673. It initially sold kimono fabrics prior to being developed into a department store. Considered as the “Harrods of Japan,” not only is this department store popular among the locals but also among foreign tourists who love high-end products.

The department store is especially popular during the summer season. This is because the spacious rooftop of Mitsukoshi Nihonbashi gets transformed into a classy beer garden during summer. It offers all-you-can-drink beer and food. Guests are also treated to the beautiful sunset view that the rooftop offers. Open from 5:30 in the afternoon until 9:30 in the evening, the rooftop beer garden runs until the 18th of September. For a two-hour course, the prices begin at 3,400 yen. Reservations are required for guests to book a table.

Coredo Muromachi is composed of several beautiful skyscrapers. Incorporated a style that is a fusion of past and present, there are various traditional foods and foods being offers by the stores in this complex. Relatively new, this complex is proving to be a great addition to the city district of Nihonbashi.

A three-building shopping complex, Coredo Muromachi is among the numerous shopping projects across the Tokyo metropolis that are operated by Mitsui Shopping Park Urban. Restaurants in this complex offer great quality food. Some of the famous stores located in this shopping complex include Kiya, Hakuza, and Ninben.

Standing right next to Coredo Muromachi is Yuito. A modern development, it is composed of various specialist stores. One of these stores is a branch of Georg Jensen Silverware. Standing at 21-stories high, the tower houses restaurants in its lower floors to the delight of many foodies.

Situated right next to Nihonbashi Subway Station, the shopping complex is highly accessible. It houses approximately 50 shops and restaurants that are spread out across the bottom five floors of the complex. Located just three blocks on the north side of Takashimaya, Coredo Nihonbashi is a sister shopping complex of Coredo Muromachi. It features a wide range of restaurants include Japanese and Western. Fashion and accessory stores can also be found in this shopping complex.

A Guide to the Tourist Attractions Located in Nihonbashi

Aside from shopping, one can also just tour around Nihonbashi. Of course, the one tourist attraction that should not be missed out when in Nihonbashi is the famous Nihonbashi bridge. The current bridge made of stone feature a dual-arch design. A boat landing was constructed to commemorate the 100th anniversary of the bridge. Due to its fame, the bridge has also become a popular launching location for accessible river transport in Nihonbashi.

Another must-visit in Nihonbashi is the Mitsui Memorial Museum. It is open from 10 in the morning until 5:30 in the afternoon. Entry is only until 4:30 in the afternoon. Like most museums, the Mitsui Memorial Museum is closed on Mondays. If Monday is a national holiday, the museum would be closed the following day. Admission costs 1,000 yen per head and 1,300 yen for special exhibitions. Having had an enormous influence in Nihonbashi, this museum has become a tourist attraction.

It houses exhibition galleries that showcase the art collection of the Mitsui family. Opened in the year 2005, the museum regularly changes its themed exhibitions. Reconstruction of a teahouse has also been made to improve the museum. It is situated in the Mitsui Tower complex, which also has the Mandarin Oriental on its top floors. Standing next to the Mitsukoshi Department Store, the Mitsui Memorial Museum can be a resting place for peace after shopping at the department store. Visitors must pass through the lobby of the Nihonbashi Mitsui Tower to enter the museum.

One other museum to check out in Nihonbashi is the Currency Museum. It is open from 9:30 in the morning until 4:30 in the afternoon. Entry is only until 4 in the afternoon though. Similar to Mitsui Memorial Museum, the Currency Museum is closed on Mondays except on national holidays. It is also closed from the 29th of December until the 4th of January the following year in celebration of the New Years. Admission to this museum is free.

Situated across the street from the Bank of Japan, the museum houses a display of the detailed history of currency in Japan. Opened in the year 1982, the museum was built to mark the centenary of the Bank of Japan. The museum also displays interesting historical coins and bills. The Bank of Japan itself stands on the site where a mint of gold coins known as the original Kinza used to be.

Nihonbashi also houses the Tokyo Stock Exchange or the TSE. It is open to visitors from 9 in the morning until 4:30 in the afternoon while entry is only until 30 minutes prior to closing time. The TSE is closed on weekends, on national holidays, and from the 31st of December until the 3rd of January of the following year in celebration of the New Years. Admission to the TSE is free.

Last but certainly not the least, one should also check out the Kite Museum. Packed with displayed of traditional kites from floor to ceiling, it is a must-visit for people who love flying kites. These traditional kites come from not just Japan but also China and other Asian countries. The museum was founded by Shingo Modegi, who was the former owner of the restaurants located below the museum. The kites in the collection amount to 3,000 pieces.

All crammed up into a tiny apartment, this museum is a gem for kite aficionados. The Japan Kite Association is also located here. In order to get to the Kite Museum, take the exit A4 or C5 upon arriving at Nihonbashi station. Search for the restaurant Tameiken. The museum is located on the 5th floor.

Restaurants and Hotels in Nihonbashi

There are also restaurants and hotels spread out in Nihonbashi. For those shopping in Takashimaya, check out Yamamotoyama, which sells green tea and traditional Japanese sweets since the year 1690. Another Japanese sweet shop to check out in Nihonbashi is Eitaro Sohonpo, which was established in the year 1857. Other traditional food shops are Yamato-Noriten, Ibasen, and Kanmo.

A restaurant to look into when craving for chicken and eel in Nihonbashi is Toritoku.  Delivered fresh every day, their dishes are definitely a must-try. The restaurant is located at 2-5-6, Nihonbashikayabacho, Chuo-ku, Tokyo. As for seafood, check out Muromachi Mohama. Though new as it was founded this year 2017, the restaurant is already highly popular among the masses. The restaurant is located at Marohon Building 2, 1-12-13 Nihonbashi Muromachi. They serve fresh and mouth-watering seafood that their customers just love. As for people staying the night in Nihonbashi, hotels near Nihonbashi include the Hotel Metropolitan Marunouchi, the Keio Presso Inn, and the Mandarin Oriental Hotel.

The History and Changes of the Osaka Castle

The Trusty Daihatsu of Japan

Understanding the Different Facets of the Popular Japanese Word, “Baka”