Considered by many as the land of modern technology, Japan is among the leading countries in the world in terms of technological advancement and modernization. More and more areas in the Land of the Sun have been developed through the years to look and feel modern and urban. Whilst most people from other countries may think that Japan has developed almost all of its cities and towns, that is not necessarily true. There are still other cities and towns in Japan that are a bit reminiscent of what used to be. One of these cities is an old merchant town known as Kurashiki.

More commonly known as Kurashiki-shi in Japanese, Kurashiki is located in the western portion of Okayama Prefecture. Considered a historic city, Kurashiki sits on the Takahashi River situated on the coast of the Inland Sea. With a total area of 355.63 square kilometers, which is equivalent to 137.31 square miles, the city has an estimated population of 483,576 as of the 31st of March in the year 2017. As a result, the city has a population density of 1,400 persons per square kilometer, which is equivalent to 3,500 persons per square mile.

With the coordinates of 34°35′ North and 133°46′ East, the city is located in the Chugoku (San’yo) Region. The city is under the governance of Mayor Kaori Ito. Its city hall is located at 640 Nishinakashinden, Kurashiki-shi, Okayama-ken 710-8565. The symbols of the city include the Camphor tree, the Wysteria flower, and the Kingfisher bird. This modern city was founded on the 1st of April in the year 1928.

Back in the day, the area served as the site of battles between the Taira clan and the Minamoto clan during the Heian period. Slowly, the area was developed as a river port. It also became under the direct control of the shogunate during the Edo period. Among its developments during this era was the construction of unique warehouses with white walls and black tiles to store goods.

Factories were later on built in this area during the first Industrial Revolution period of Japan, which was during the Meiji Restoration. This included the Ohara Spinning Mill. Until today, this factory still stands and serves as the main tourist attraction Ivy Square. Two towns were merged with Kurashiki on the 1st of August in the year 2005, namely, the town of Mabi hailing from Kibi District and the town of Funao hailing Asakuchi District. Kurashiki also serves as the home of the Ohara Museum of Art, which is the first museum of Western art in the country.

The Bikan historical area serves as the old merchant quarter of Kurashiki. The area houses various fine examples of wooden warehouses called kura from the 17th century. These warehouses are painted in white with the traditional black tiles. These warehouses stand along a canal that is framed with weeping willows. 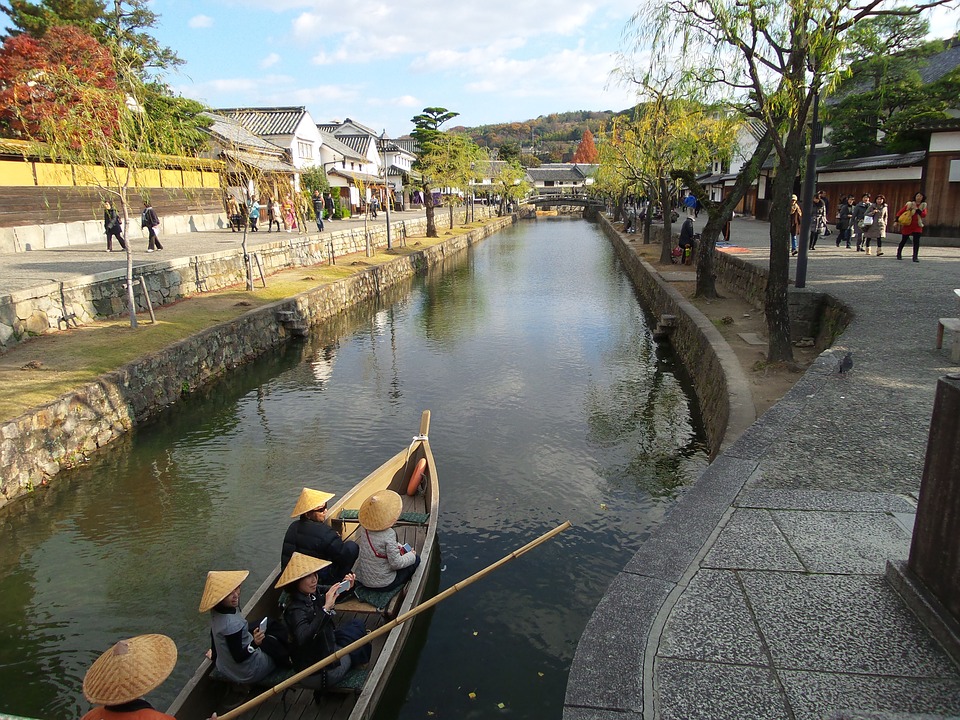 The canal is also filled with beautiful koi. To make the area look more like a place from the Meiji period, there are no electric poles standing in this place. Among the previous town halls of the city was situated in the Kurashiki Kan, which is a building constructed in the year 1917 and follows a European theme.

There used to stand a theme park near Kurashiki Station known as Tivoli. It opened in the year 1997 but eventually closed after 10 years of operation in the year 2008, along with huge debt. What connects the city to Sakaide located in Kagawa Prefecture is the Great Seto Bridge. The bridge spans over the Inland Sea. The former city hall of Kurashiki in the year 1960 was designed by the winner of the 1987 Pritzker Prize for architecture known as Kento Tange.

One can also stay in Kurashiki overnight. An option would be Kurashiki Youth Hostel. Located at 1537-1 Mukoyama, their contact number is +81 086-422-7355. The rooms consist of a small TV area and two sets of bunk beds. The hostel also has a commons area with a fireplace as well as musical instruments. For tourists, the hostel offers pick-up services though one would have to call ahead of time. One can also commute going to the hostel by taking bus #6 going to Shimin-kaikan-mae and walking uphill from there for 10 minutes. It costs about 2,940 yen per head and 6,930 yen for a twin room.

Another hotel to check out is Kurashiki Station Hotel. Located at 2-8-1 Achi-dori, their contact number is +81 086-425-2525. Standing at five floors, the hotel offers 111 small rooms that are a bit better in comparison to other average business hotels. Discounts are offered for people who book online. Visitors can also avail buffet Japanese breakfasts for 1,000 yen per head. Rooms are priced at 6,300 yen for single and 10,500 yen for double.

A better alternative is Kurashiki Ivy Square Hotel. Located at 7-2 Hon-machi, their contact number is +81 086-422-0011. Situated in a great location, the hotel offers small but decent rooms. There are also various amenities in Ivy Square such as shopping, a beer garden, and a restaurant. A number of rooms face a parking lot while others are greeted with a grove of palm trees. Rooms with private bathrooms are priced at 10,500 yen for single and 18,900 yen for double.

The first stop in exploring Kurashiki is the Canal Area. The area of Kurashiki served as a vital point along the distribution route of rice, which was the most important commodity of the country, during the Edo period. Kurashiki’s storehouses served as storage for huge quantities of rice coming from the surrounding areas prior to the rice being shipping to Edo and Osaka. The importance of the city in the rice trade was recognized, hence it was put under the direct control of the shogunate. The name of the city was even based on the storehouses that it housed, known as kura.

Boats and barges were able to navigate between the nearby port and the storehouses of the city by building the canals. A central portion of the previous canal system of the city has been preserved in the Bikan Historical Quarter. What accentuates the canal are the weeping willow trees that line the canal and stone bridges, providing a scenic view to visitors.

The first building of the museum is known as the Main Gallery. This building was built upon the founding of the museum. It houses most of the highlights of the museum. Some of its features on display include masterpieces by Picasso, Gauguin, Rodin, Pollock, El Greco, Modigliani, Klee, and Kandinsky. The artists included in the collection of this museum span a wide range of time and nationalities.

The two buildings next to the Main Gallery are the Annex Building and another building that features the Asiatic Art Gallery as well as the Craft Art Gallery. The Annex shows masterpieces which are created by local artists, some of which are oil paintings and sculptures. On the other hand, the Craft Art Gallery features, ceramics, stencil dyeing, woodblock prints, and other crafts. The Asiatic Art Gallery features antiques hailing from China as well as artworks and artifacts hailing from Egypt.

Entrance to the Kojima Museum is already included in the admission fee. As the name implies, this museum is a gallery that features artworks by a Japanese artist known by the name of Kojima Torajiro.

On behalf of the owner of the Kurabo textile company, as well as the founder of the Ohara Museum, Ohara Magosaburo, Kojima Torajiro bought most of the artworks that are on display at the Main Gallery. Side note, the Ohara Museum was actually constructed by Ohara to commemorate Kojima in the year 1930 after his passing just a year prior.

Another place to check out in Kurashiki is the Ohashi Family Residence. The Ohashi family was among the merchant class of Kurashiki back in the day. Their residence was constructed in the year 1796. Its design is typical to that of a machiya, which is the Japanese term for “town house,” of rich merchants in Kurashiki. The house features various rooms that offer a sense of the olden days.

Restaurants to Try in Kurashiki

This restaurant chain is so popular that it actually has eight locations or branches within the city. The main branch of this restaurant chain is located at 2-3-23 Achi-dori. It is open from 7 in the morning until 9 in the evening. The main branch is also the easiest branch to find. A dish costs about 600 yen. Their logo is recognized with its colors yellow and black.

For seafood lovers, a must-try in Kurashiki is Higashi-da. Located at 2-2-18 Achi-dori, their contact number is +81 086-427-2248. They are open from Monday to Saturday from 5 in the afternoon until 11 in the evening. They offer fresh and excellent seafood choices. The restaurant is also kind of old and traditional. Omakase costs about 5,000 yen and their anago oshizushi, which is made with eel, is a must-try.

Another noodle shop to look into is Kana Izumi. Located at 8-33 Hon-machi, their contact number is +81 086-421-7254. Open from Tuesday to Sunday, their operating hours are from 10 AM to 8:30 PM. This food shop has that atmospheric surrounding similar to the Bikan Area. A bowl of udon or tempura costs about 550 yen while sets can cost about 3,500 yen.

Other Things to Do in Kurashiki

Aside from eating and checking out the canal and museums, there are still other things that one can do or check out in Kurashiki. One of the places that most visitors going as well is Washuzan Highland Park. Located at 303-1 Shimotsui Fukiage, the park is open to the public on weekdays from 10 in the morning until 6 in the afternoon. It is also open on the weekends from 9 in the morning until 7 in the evening though these hours are also subject to change. Activities that can be done in this park are swimming, ice skating, and roller skating.

Another option would be to go to Kurashiki Sports Park. The park contains a number of facilities for people who wish to exercise or get in shape. It features tennis courts and a fitness center, great for people who would like to work out or sweat a bit. One can also check out Muscat Stadium, which is the largest baseball stadium located in Okayama.