One of the most popular countries that tourists visit every single year is Japan. Japan has many things to offer. For one, there are various temple, shrines, and heritage sites in Japan that are perfect for people who are going on a spiritual journey. However, if one is into nature, Japan also does not fall short. There are various mountains and heritage areas in Japan that are known around the world. One of these mountain areas would be none other than Shirakami-Sanchi.

Around the world, this wilderness area is known as the Shirakami-Sanchi World Heritage Property. Commonly, the area is only called Shirakami-Sanchi. The wilderness area occupies a third of the Shirakami mountain range. It also contains the biggest surviving virgin beech forest located in East Asia. The property can be found along the Sea of Japan. It is situated in the northern part of Honshu at changing altitudes from 100 to 1,243 meters above sea level.

The dense forest houses several trees. These trees include beech trees, Mongolian oaks, and Japanese wingnut trees. The view is just so beautiful in the morning when sunlight shines through these trees. There is also a wide range of other trees and plants that can be found in the area. Because of the warm natural light, walking through the dense forest can feel relaxing as well as enlightening to the soul.

A deep humus layer composed of the leaves that feel from various trees cover the ground of the forest. The said layer also serves a purpose, which is to keep the soil drenched in rainwater by acting as a natural dam for the dense forest. Because of the forest being 100 percent natural, visitors can drink straight from the clean fresh spring water that can be found in this area.

Traditional hunters live in the area of Shirakami. They serve as not just inhabitants but also as protectors of the forest. A saying that goes “a bag of beech nuts is worth its weight in gold” certainly applies to this situation. This is because the inhabitants in the area benefit by obtaining mountain vegetables and mushrooms from the beech forest. The forest also provides the people firewood as well as fresh fish. The forest also serves as the source of water for agricultural purposes. 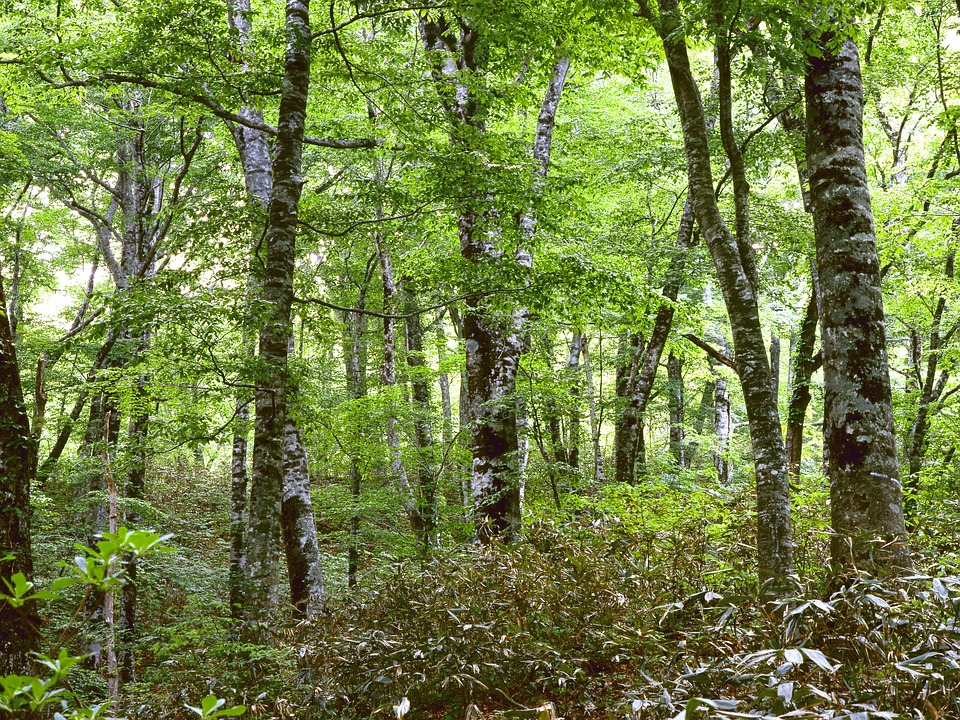 Aside from the importance of Shirakami Sanchi in terms of preserving its beech forest, the area is also significant in terms of preserving the long and rich history of how human beings and nature have co-existed and adapted to each other. Through the years, people learned and gained knowledge about the beauty and essence of nature as well as developed their culture around it.

It is said that the formation of the beech forests in the area started around 8,000 years ago, which was around the beginning of the Jomon period. It was during this period that people in the country first started to live in fixed settlements. During this time, the people of Japan were also developing their skills in pottery and gaining knowledge with the use of stone tools.

Many historians say that this civilization prospered with the help of the bounty coming from Shirakami Sanchi. Until today, the ancient lifestyle and culture of the people from the Jomon period are still being passed on from generation to generation. These include methods for hunting, culinary arts, and techniques in burning charcoal. At present, these tactics and skills are still apparent in the region.

There are also several animals that inhabit Shirakami Sanchi. One of the most notable animals in the area is the black bear. The forest also serves as the home of more than 87 species of birds. These include the black woodpecker, the Japanese serow, and Hodgson’s hawk eagle.

Hiking in the Mountain Range and Visitor Centers

Several hiking trails can be found in Shirakami Sanchi, which serve as the main attraction in the region. These trails lead visitors through the dense forest going to different places with natural wonders such as waterfalls, lakes, and mountain peaks. The most famous hiking trail in the area is the path that goes to the Anmon Falls located in the northeastern part of Shirakami Sanchi. The Anmon Falls are composed of three waterfalls that can only be accessed from early May to early November.

The famous trail leading to the falls begins as flat and paved. However, as the trail stretches into the valley, it also gradually elevates and becomes narrow. It takes around 45 minutes to reach the first waterfall, which stands at a height of 26 meters. From there, the trail starts to become steep.

Aside from the Anmon Falls, another attraction in the area is called the Juniko. Often referred to as the “twelve lakes,” the Juniko is composed of small ponds and lakes that are linked by hiking trails. These bodies of water are located along the coast of the Sea of Japan and can be found on the northwestern portion of Shirakami Sanchi.

Some of the activities offer in the area include hiking, boating, fishing, and camping. One of the bodies of water popular in the area is the Aoike, which features stunningly beautiful blue water. A tiny visitor center can also be found in the area known as the Juniko Eco-Museum Center Kokyokan, which offers information about the beech forests in Shirakami Sanchi.

For fans of the Grand Canyon, be sure to look for the Nihon Canyon. It is said to be the miniature version of the Grand Canyon. The Nihon Canyon is composed of walls with different shades of brown and grey rocks. It can be seen close to the entrance of the Juniko. A walking trail is also available, which links the Juniko and the canyon. However, this trail is closed from late November to March the following year.

For a more challenging hiking trail, take the one that leads to Mount Shirakamidake. Considered as the tallest part of the mountain range, this mountain provides visitors a challenge as they go up the hiking trail. However, the trail may also be accessed by public transportation for people who still wish to go up the peak but no longer have enough energy to hike.

Getting To and Around Shirakami-Sanchi, Japan 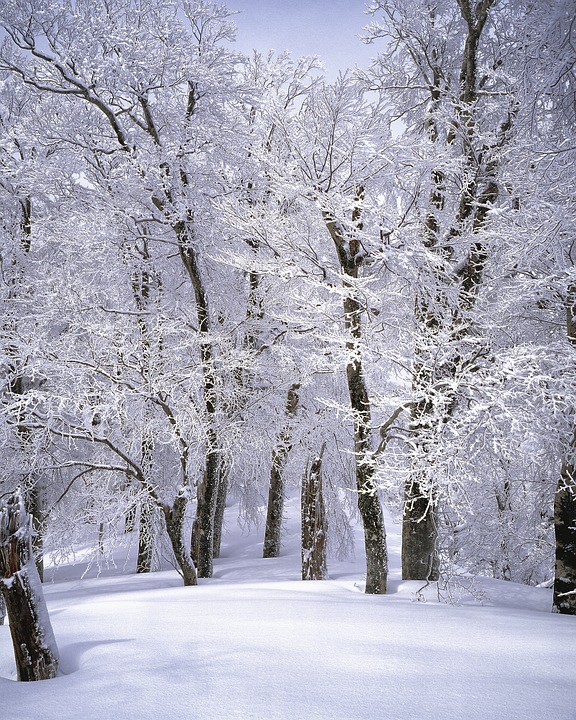 There are several ways to get around Shirakami Sanchi. One way is by car. Due to the limited public transportation in the area, it would be best to either bring a car or rent one when going around Shirakami Sanchi. Car rental outlets are available in Hirosaki, Noshiro, Akita, and Odate. There are also three main roads that one can take when driving a car, namely, Route 101, Route 28, and Route 317.

Route 101 traverses the length of the coast the surrounds the northern side and the western side of Shirakami Sanchi. Roads that branch off Route 101 can also be taken to reach the Juniko as well as the trailheads that lead to Mt. Futatsumori and Mt. Shirakamidake. Though the Route 101 is open throughout the year, the road to the Juniko is sadly closed during the winter season, which lasts from late November to March.

Route 28 begins at Hirosaki and transverse the Anmon Falls trailhead. The road goes over the Tsugaru-toge Pass and eventually links to Route 101 close to the lakes of the Juniko. The elevated portion of the route is composed of gravel and is closed during the winter season, which lasts from mid-November to late May. Furthermore, the Anmon Falls trailhead is also not accessible from late November to late April.

Route 317 begins at the city of Noshiro. It passes through the mountains located on the eastern side of Shirakami Sanchi. The road also passes the Dairakyo Gorge and a mountain pass. The road eventually links to Route 28 close to the Anmon Falls. A section of the road that belongs to Aomori is a gravel road. The elevated portion of the road is inaccessible during the winter season, which lasts from late November to late May.

One can also access Shirakami Sanchi by taking the train on the JR Gono Lone. Via the Gono Line, one can also take the “Resort Shirakami” rapid train, which transits between Hirosaki and Akita. The train also stops at the Juniko. Local trains are also available from Higashi-Noshiro Stations and stop at the Juniko. This trip would take about 75 minutes and cost 970 yen per head on a one-way trip.

Another way of reaching Shirakami Sanchi is by taking a bus. The only bus line available for this route is the one that transits between Hirosaki and the trailhead that leads to the Anmon Falls. These buses are under the operation of Konan Bus. From mid-June to early November, the bus operates only thrice per day. The trip takes around 90 minutes and costs 1,650 yen per head on a one-way trip.

Why Shirakami-Sanchi is A UNESCO World Heritage Site

There are various categories that Shirakami Sanchi passed in order to be designated as a UNESCO World Heritage Site. One of the reasons why the area was granted this prestigious title is due to its area being wild, rare, and undisturbed. Because the area has been preserved well through the years, it is quite rare to find another of its kind around the world. In Japan, it is the only such forest that exists in the country.

The forest ecosystem of the area serves as the reflection of the history of global climate changes. The area also serves as an exemplary example of how nature and animals develop together and adapt to one another without being touched by human beings. The succession of communities of plants can also be found here. How several animal groups depend on the natural processes of this forest is something to be learned and be in awe of.