Ashikaga Yoshimitsu: A Great Example of the Ashikaga Shogunate

At a young age of just 10, Yoshimitsu was appointed as shogun, which was the position as the hereditary head of the military estate, by his father. Many would say that 10 years old was such a young age to put so many responsibilities on the shoulders of a child. However, this custom would continue to their succeeding generations. Ten years later, Yoshimitsu was admitted as Acting Grand Counselor, which was called Gon Dainagon in Japanese, to the imperial court at the age of 20.

Despite his young age, Yoshimitsu had a promising career in politics. He showed his great potential in the year 1379 when he conducted the reorganization of the institutional framework of the Gozan Zen establishment. As a result of this project, Yoshimitsu became the first person of warrior status to have himself and his private residence serve as host to the ruling emperor.

Just after two years, Yoshimitsu went on to become the Grand Chancellor of State, which is called Dajo daijin in Japanese. This position was considered the highest among the members of the imperial court. He went on to retire just three years after that.

In the year 1395, Yoshimitsu decided to retire from all public offices. What he did next was to take the tonsure and made a move into his Kitayama-dono retirement villa. This villa of his showcased a pavilion that was covered in gold leaf known as Kinkaku shariden.

Even after his retirement, he was still able to receive envoys in his retirement home. These envoys came from both the Ming Dynasty and the Joseon court on not less than six occasions. Through these visits, the terms of a Sino-Japanese trade agreement were forged. This agreement held on for more than a century.

Thanks to the diplomatic efforts of Yoshimitsu, as well as his obvious displays of obedience, he was recognized as the “King of Japan,” which is called Nihon kokuo in Japanese, by the Chinese sovereign.

Following his retirement from office, Yoshimitsu still wanted to hold power over his constituents. He planned on becoming what is called “Dajo tenno” in Japanese, which is a title that was traditionally used to call a retired emperor. While he started to plan this motion in the year 1407, he did not live to see it through, as he passed away just a year after. Yoshimitsu also had a Buddhist name Rokuon’in.

The Timeline of Ashikaga Yoshimitsu’s Reign

Yoshimitsu was the turning point that resolved the conflict between the northern imperial court and the southern imperial court. The resolution between these two conflicting parties was concluded in the year 1392. This was thanks to his persuasion of Go-Kameyama of the Southern Court to give the Imperial Regalia to the Northern Court’s Emperor Go-Komatsu. This resolution was probably the greatest political achievement of Yoshimitsu.

Yoshimitsu also played an instrumental role in the reopening of trade with China. Under his rule, formal trade relations with China was made and established. He began making efforts as early as the year 1374. He sent a mission in the year 1374 and another one in the year 1389. However, these efforts only bore fruits in the year 1401.

In the year 1401, an embassy was sent by Yoshimitsu to the Ming Dynasty of China. This embassy was led by priest Soa and Koetomi, a Hakata merchant. Among the items that they brought with them on this journey was a conciliatory memorial to the emperor. Other things include horses, gold, paper, armor, fans, screens, swords, and inkstone cases.

Considered a success, the mission was sent back to Japan a year after its voyage. Soa and Koetomi were accompanied by an envoy from the Ming dynasty. This envoy brought with him an official imperial Chinese calendar. He also brought documents that recognize Yoshimitsu as the official “King of Japan.”

The most famous out of all these structures is the Golden Pavilion. More commonly known as Kinkaku-ji in Japanese, the Golden Pavilion can be found on the northwestern outskirts of Kyoto. The temple was built after the retirement of Yoshimitsu from the Ashikaga shogunate in the year 1394.

He acceded his throne to his son Ashikaga Yoshimochi in the year 1394. However, even after Yoshimochi was confirmed as the 4th shogun of the Ashikaga shogunate, Yoshimitsu still retained his powers in the government. In fact, his powers were not transferred to his until his death on the 31st of May in the year 1408. Only then was Yoshimochi able to reign on his own.

Aside from his major influence in reshaping the government of Japan at the time, Yoshimitsu also had a significant role in the genesis of Noh theater. He served as the patron of Zeami Motokiyo. Zeami was an actor who was considered by many as the founder of Noh.

Also known as Kanze Motokiyo, Zeami Motokiyo was not just a Japanese actor but also an aesthetician and a playwright. He was introduced to the theater performances of Noh by his father Kan’ami. Even at such a young age, Zeami was already found to be a skilled actor. Because both he and his father are great actors, they formed into a family theater ensemble.

Noh theater grew popular during the Muromachi period. It reached a point wherein Zeami was given the chance to perform in front of Ashikaga Yoshimitsu, who was the 3rd shogun of the Ashikaga shogunate. After the performance, Yoshimitsu was highly impressed of Zeami’s performance. As a result, a friendship was forged between the two.

Zeami was welcomed by the court of Yoshimitsu. He was also offered an education in philosophy as well as in classical literature. This was at the same time that he was also acting. After getting patronage in the year 1374, Zeami decided to pursue acting as his career. Sadly, his father passed away in the year 1385, which made him the leader of their family ensemble.

While Zeami executed numerous performances for Ashikaga Yoshimitsu, he also wrote several others throughout his career. However, following the passing of Yoshimitsu, these performances in the court decreased. This was because Yoshimitsu’s son Yoshimochi was not a great fan of Zeami’s drama.

Nonetheless, Zeami still continued to prosper after Yoshimitsu’s death by seeking patronage from wealthy merchants. With so many being appreciative of Zeami’s talents and skills in the drama department, he continued to flourish in this industry. Zeami continued to become famous and respected not just in this industry but in Japanese society overall.

Unfortunately, Zeami became the target of hostility under the rule of Ashikaga Yoshinori, who succeeded the throne in the year 1429. Yoshinori was great friends with Onnami, who was a nephew of Zeami. However, Zeami refused to declare Onnami was the next leader of their family ensemble, which angered Yoshinori.

Probably because of this disagreement, among other theories circulating this issue, Zeami was sent into exile to Sado Island. Zeami was only able to return following the death of Yoshinori in the year 1441. Zeami eventually passed away in mainland Japan in the year 1443. 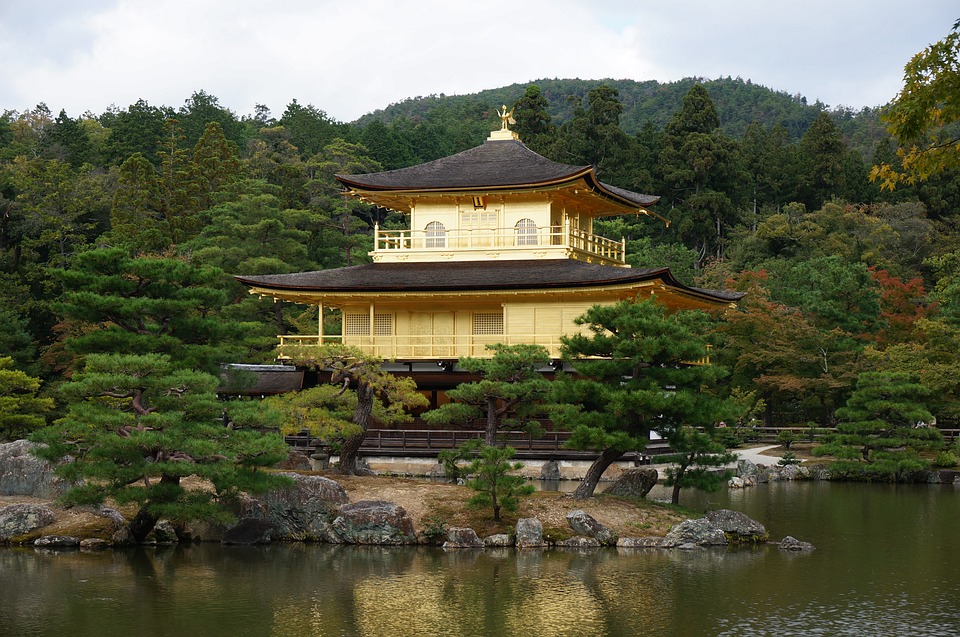 Literally translating to the “Temple of the Golden Pavilion,” Kinkaku-ji is a Zen Buddhist temple that can be found in Kyoto, Japan. This temple is officially known as Rokuon-ji, which literally translates to the “Deer Garden Temple.” The temple is among the most famous temples in the country and welcomes huge crowds of visitors every single year.

Initially, the site of Kinkaku-ji was a villa known as Kitayama-dai. The property was owned by Saionji Kintsune, an influential statesman, before it was purchased by Ashikaga Yoshimitsu. After buying this property, Yoshimitsu had it transformed into the Kikaku0ji complex.

Following the passing of Yoshimitsu, his son Yoshimochi followed his wish to transform this building into a Zen temple. A statue of Ashikaga Yoshimitsu was also built and kept in this temple complex. However, the original statue was destroyed by flames during a fire. Thankfully, the statue was successfully restored after some time.

The pavilion is famous for its gold-leaf coating. Covered in gold leaves, the pavilion obtained its name Kinkaku from this visual. The reason behind its color was due to the belief that gold mitigates and cleanses any negative energy that surrounds death.

Furthermore, the golden color also showcases the visual excesses that were relied upon during the Muromachi period. As the sunlight hits the golden hues, its reflection creates beautiful effects on the pond nearby. Overall, Kinkaku-ji is definitely a must-visit for people who are looking into learning more about Ashikaga Yoshimitsu and his well-known pavilion.