Fun Facts about the Iriomote Wildcat

Size and Appearance: This particular cat is the size of an ordinary domestic cat and is about 30 to 35 inches long. They are normally in the 3 to 5-kilogram weight range. These cats have patterned fur which is a combination of spots and stripes. They have cute short legs and tail and rounded ears. The Japanese have named them, yamapikaryaa, which means “that which shines on mountains”. This is because of the fact that their eyes reflect light and look as if they flash in the dark.

Life Span: The life span of an Iriomote cat is around 12 to 16 years. Most of the Iriomote wildcats held in captivity are known to live an average of 13 years. These are cats which were discovered from a young age and were brought up in sheltered, controlled and protected environments like zoos. In the wild, it is known that the Iriomote cat lives a shorter average lifespan due to external factors and threats like road accidents, and more.

Habitat: This particular cat species is indigenous to Japan’s Iriomote island, thus its name. This island is a part of the Okinawa prefecture and is well-known for its mountainous landscape. The Iriomote islands have provided a sub-tropical habitat for the Iriomote wildcat, with its lush forests and extensive waterways. They are known to love climbing trees and even swim. The cat is known to also enjoy the sandy beaches of the island on rare occasions.

Distribution: This particular cat species is predominant only on the island of Iriomote in Japan. It is widely distributed throughout the 290 square meter area of the island living in the deep subtropical forests. On the other hand, they are rarely seen by people because they are only active at night. They are nocturnal animals and are known to sleep in caves during the day.

There are roughly 100 to 120 individuals on record more than a decade ago. For a while, the population became stable before a rapid decline has been observed due to the loss of habitat.

Current Status: This species of cat, although just recently discovered, is considered as endangered. There are a variety of factors which have contributed to their current status.

How were they discovered?

There had been a historical record of large cats being hunted in the Iriomte islands of Japan. However, it was only in the mid-1960s when the Iriomote cat was acknowledged by zoological societies of Japan. Prior its discovery it was known merely as “yamamayaa” or “the cat in the mountain” because it is not as large as ordinary wildcats, but its behavior proves that it would be difficult to be considered domestic.

The first record of its captivity was in 1962 when a kitten was captured by the University of Ryukyu for their study. They failed to capture a specimen of an adult specimen of this animal. At this time, the talks of an unusual species of cats living in the mountains of Iriomote was just considered as a rumor. Many scientists believed that it was just a hoax and people might have mistaken regular domesticated cats as wild. So in 1965, Yukio Togawa, a zoological and wildlife author took it into his own hands and traveled to Iriomote to see the animal for himself.

Since the animal was nocturnal, seeing one in the wild was almost impossible. Togawa resorted to finding remains to check if it truly is a species of its own. At the time, it was discovered that the presence of the Iriomote cat was too common on the island that people actually use their meat for soups. They were easily disposed of but finding a complete set of remains proved difficult.

It was in 1967 when a pair of these cats, living male and female species, were studied in Tokyo. It was also during this year that they were officially named Iriomote cat, after their original habitat.  It was Yoshinori Imaizumi, the director of the zoological department of the National Museum of Nature and Science that first provided a recognized scientific description of the animal. The male cat lived until 1973 while the female cat lived longer until 1975. It was through this pair that scientists started to study their behavior, eating habits, mating habits, and more.

What makes them different from other cats?

At the time they were discovered, many scientists were confused whether it was a new species or simply a sub-species of another wildcat. They were too small compared to their wildcat counterparts like the leopard, the tiger, among others. They also do not look like any typical domesticated cat. They may have the same size but they have shorter tails, shorter legs, rounded ears, and larger paws.

Because of this, it is still unsure whether the iriomote wildcat is a sub-species of the leopard or it is a species of its own. From DNA analyses, it has been discovered that there are some characteristics in its DNA which is proven identical to the leopard cat. It is believed that the Iriomote cat evolved from the leopard cat about 200,000 years ago.

What are their distinct features?

Among its distinct features would be its short legs, short tail, larger (flatter) paw and rounded ears. These are its characteristics which cannot be found in another species of cats. Each of its ears has a white spot at the back. Its eyes are light amber in color, which is believed to “shine” or “flash” at night. Its face is of a typical feline but is longer. Its skull is very similar (but thicker) to a leopard cat and other cat species in the area. Unlike other wild cats, its tail is thick from base to tip and is also shorter. It is also much furrier, like those of some domestic cat species. They are known to be good tree climbers but their jumping power is weak compared to larger wild cats. 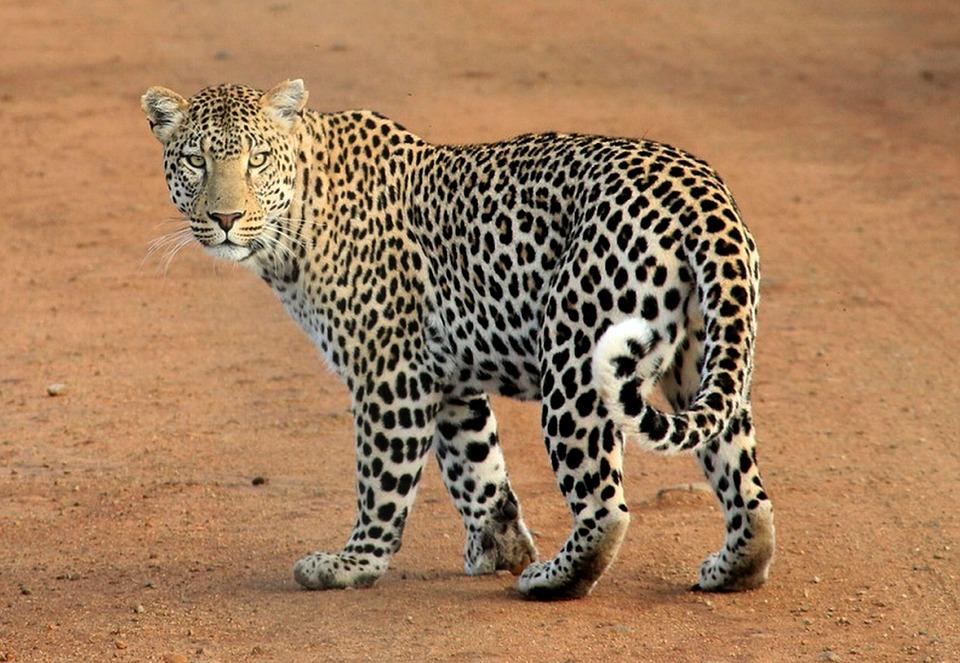 The typical Iriomote cat has dark gray or light brown fur on its coat. It has a distinguishable stripe from its forehead to the back of the head. The difference it has with a leopard is that the stripe only reaches up to the neck. In its body are dark spots with irregular stripes. The same dots reach the tail. However, the tip of the tail is dark and of solid color. Its coloring is similar to that of a Java mongoose but the Iriomote cat has spots. Its spots almost look like that of a leopard, a civet, and a genet combined. But the Iriomote cat spots are much less defined.

It used to be thought of as a weasel, during the earlier times. Because its ears are rounded and its tail fat and bushy, like a civet and a genet. But actual sightings confirm that it is a wildcat.

Where do they live?

Iriomote cats are known to live in the sub-tropical forests of Iriomote island in Japan. They can be found in hollows of trees or shallow caves during the daytime where they rest. During twilight, they are known to hunt and play.

Generally, Iriomote cats are solitary. They are often seen as individuals rather than packs, almost similar to its relative the leopard cat. They are highly territorial and are known to have individual home ranges with which they mark and patrol. It is known that home ranges of same genders rarely overlap, while those of opposite genders overlap during mating season.

Home ranges are not forever homes and are known to vary depending on the season. These home ranges are small parcels of land which are marked by the animal by defecating and urinating in bushes, rocks, and trees. When other individuals smell these scents, they know pretty well that they are trespassing another’s territory and this proves to be dangerous.

How do they behave?

There is very little data to show the actual behavior of this animal despite the fact that they have been discovered more than 50 years ago. This may be attributed to the fact that they are rarely seen in daylight and live such solitary lives. It is difficult to generalize their behavior.

What do they eat?

Compared to other wild cat species living in a big habitat, the Iriomte wild cat lives on a small island with no neighboring predators. This means that they have a big island all to themselves and they are not forced to seclude themselves and limit their diet. What is interesting is that research shows that their meals vary depending on the season. During the summer and spring frogs and lizards are quite common. Their diet changes to bats and crickets during the fall and winter.

They also feed on Ryukyu flying foxes, Ryukyu wild boar, rabbits, and other rodents. They also feed on birds like ducks, owl, and more. Generally, the Iriomote cat is known to be a predator and a carnivore just like its relatives.

Since these cats live on an island, they are well-known swimmers and they enjoy the water. With this ability comes their good fishing skill. Because of this, fish from the shore is included in their diet. This also includes freshwater prawns, water birds, crabs, and the like.

How do they reproduce?

The only time Iriomote cats are seen with its own kind is during the mating season which starts from December to March. Usually, the peak of the females going into heat happens during the months of January and February. Typical birthing months of female cats happen between April and June where a maximum of three kittens are born to a single mother.

Furthermore, the kittens are known to live with the mother well into adulthood or roughly eleven months. Sometimes kittens as young as five or six months start marking their own home ranges but these are still observed to overlap with their mother’s home range. The adult cat finally separates fully from their mother when the new mating season comes.

Threats to the life of the Iriomote Wildcat

Since the Iriomote cat lives in such a small habitat, an island separated from other islands by sea, it is almost impossible to see variations (or mutations) of these animals in the next hundred or so years. The restriction in their distribution also contributes to the limitation of their number.

On top of that, these animals are often affected by humans in many ways. They are common victims of road accidents, traps, land development, and deforestation. It has also been observed that these animals are closely hunted by dogs. In the recent years, it was discovered that a certain breed of poisonous toads which were proliferated in the neighboring island of Ishigaki to exterminate pests prove to be fatal to the lives of Iriomote cats.

Diseases, competition, and genetic pollution are also common when Iriomote cats interbreed with ordinary house cats. This may affect the genetic integrity of the offspring and may further decrease the number of existing Iriomote wild cats.

A common problem in the area is found that Iriomote cats are seen to cross-breed with domestic cats. This affects the integrity of the breed’s DNA. To avoid interbreeding with feral cats, all stray cats on the island have been sterilized or vaccinated. Furthermore, certain parts of the island have been considered as wildlife preserves that cannot be touched to developed by modernization. Signs have also been put up along the roads to remind people of the possibility of hitting these endangered species of cats.