More commonly known as Shirakawa-mura in Japanese, Shirakawa is a well-known village that can be found in the district of Ono in Gifu Prefecture. The village is most famous as the site of Shirakawa-go, which is a well-known village that, albeit small, is traditional and showcases an architectural style called gassho-zukuri. Along with Gokayama, which is located in Nanto, Toyama, Shirakawa-go is recognized as one of the World Heritage Sites of UNESCO.

The village of Shirakawa has a total area of 356.55 square kilometers, which is equivalent to 137.66 square miles. It was also estimated that its population was 1,668 in 582 households on the 1st of December in the year 2017. As a result, the village had a population density of 4.7 persons per square kilometer.

Situated in Gifu Prefecture, the mountain village runs along both Ishikawa Prefecture and Toyama Prefecture on the mountains of Ryohaku. The highest elevation there is Mount Hakusan, which stands at 2,172 meters tall. This height is equivalent to 7,126 feet. The area of Shirakawa is primarily composed of mountainous forests. One of the main characteristics of the village is its steep places.

Flowing between the mountains is the Sho River. This river flows all the way to the north and into Nanto, which is located in Toyama. Most of its residents live in the river valley. It takes about 3 hours to drive to the village from Takayama, Gifu Prefecture. The municipalities bordering the village include Takayama and Hida in Gifu Prefecture, Nanto in Toyama Prefecture, and Hakusan in Ishikawa Prefecture.

Before visiting the village of Shirakawa, it is important to know about its climate. The village experiences a humid continental climate. It also undergoes four seasons with winter being the most predominant season. In fact, the village is actually known as among the snowiest places in Japan. The annual average snowfall in Shirakawa is more than 10 meters, which is equivalent to 415.4 feet, with the development of snowbanks reaching more than 2 meters high.

Because of the constant heavy snow in the area, houses were designed with thick thatched roofs known as gassho-zukuri styled roofs. These roofs are well-known due to its distinct characteristics and its purpose. These houses look quite picturesque with the Hakusan National Park mountain ranges as a scenic backdrop. The houses also serve as a primary tourist attraction in the area.

Initially, the area surrounding Shirakawa was a part of the traditional province of Hida. However, following the post-Meiji Restoration, the area became a part of the Ono District in Gifu. Eventually, the village of Shirakawa was formed on the 1st of July in the year 1897. This was based on the formation of the modern municipalities system.

The local economy of Shirakawa is highly dependent on seasonal tourism. Thanks to the rising popularity of the gassho-zukuri villages, an improvement can be seen in the financial condition of Shirakawa through the years. It became even better when the village was finally designated as a UNESCO site.

A downside to the growing fame of the village is the increasing number of tourists in the area. It resulted in the area suffering from damages caused by pollution. Furthermore, in order to cater to the huge number of guests that visit the area every year, some homes in the village were turned into hostels and souvenir stores, which somehow diminished the village’s World Heritage status. Catering to numerous tourists is seen as an impending harm to the simplicity and fundamental scenery of the village.

The biggest gassho-zukuri in the area is the Wadake Home. Other attractions in the area include the Shirakawa-go Hirase Onsen, Hida Tunnel, Amau Pass, Shirakawa Hachiman Shrine, Miboro Dam, Lake Miboro, and Hakusan Rindo.

Touring Around the Historic Villages in Shirakawa-go

The Shirakawa-go can be found lining the Shogawa River Valley. Its length reaches both Gifu Prefecture and Toyama Prefecture. The famous village was designated as a UNESCO world heritage site in the year 1995. It is most well-known for its historic gassho-zukuri farmhouses. Some of these farmhouses are actually over 250 years of age.

Translating to “constructed like hands in prayer,” gassho-zukuri houses incorporate steep thatched roofs designed to withstand heavy snowfall. These roofs are said to look like the hands of Buddhist monks while they are praying. The development of this architectural style took years. Its design does not incorporate any nails and offers a huge attic space that is typically utilized for silkworm cultivation.

The biggest village in Shirakawa, which also serves as its main attraction, is Ogimachi. Coming from Takayama, one can plan a day trip to Ogimachi. People on a bus journey between Kanazawa and Takayama may also opt to stop in Ogimachi for a day. However, probably the best way to enjoy the experience in Shirakawa is to stay overnight. There are several farmhouses in the area that also serve as minshuku.

What makes these farmhouses unique is its ability to withstand the harsh winter season that the village faces every single year. Despite the traditional design of these houses, its roofs have proven to be effective in withstanding the heavy snowfall for years. These farmhouses are best viewed when it is surrounded by green fields as well as when they are covered in snow.

At present, some of these farmhouses serve as restaurants. Several of them also serve as minshuku for guests who wish to stay overnight. A number of these houses also moved to an open-air museum located across the river. The purpose of this relocation was to preserve these farmhouses and save them from destruction. Among all the villages in Shirakawa and Gokayama, the best place to visit is Ogimachi due to its accessibility.

The roofs of these farmhouses are known to be steep as well as massive. The design of these roofs was based on the huge amounts of snow that the region gets every winter season. It is typical for the village to be covered in snow about a meter or two high, especially during the height of the winter season. Locals usually have a bit of a hard time because of the snow, but the houses look like a winter landscape when snow falls.

To best enjoy the view of the village, witness it from the Shiroyama Viewpoint. This is the best spot to be when checking out the farmhouses both during daytime and during the light-up event. However, this great spot offers limited space. Hence, there are tickets needed to access this spot during the event.

Overnight visitors get the first offers for tickets to this viewing spot. After which, these tickets are then offered to the general public for 500 yen each. Sometimes, people line up just to get their hands on the said tickets, considering how cheap it is for the great view that it offers.

For visitors who would be in the area during the illumination event, it is very important to note that the temperature in the area typically reaches below freezing point. Roads and trails during this season are also usually covered with snow and even ice at times. Hence, wearing the proper winter attire, sturdy shoes, and face protection is a must to avoid any mishaps or accidents.

Skiing in the Area of Shirakawa During Winter

The small hill is not open during night time. During daytime, however, the ski hill is open from 8:30 in the morning until 4:30 in the afternoon. The opening and closing hours of the ski hill is the same for weekdays, weekends, and holidays. However, it is closed on Tuesdays and Wednesdays. Expect the ski hill to be packed with people during weekends and holidays as well.

A Guide to Farmstays (Unlike Hotels) in Shirakawa, Japan 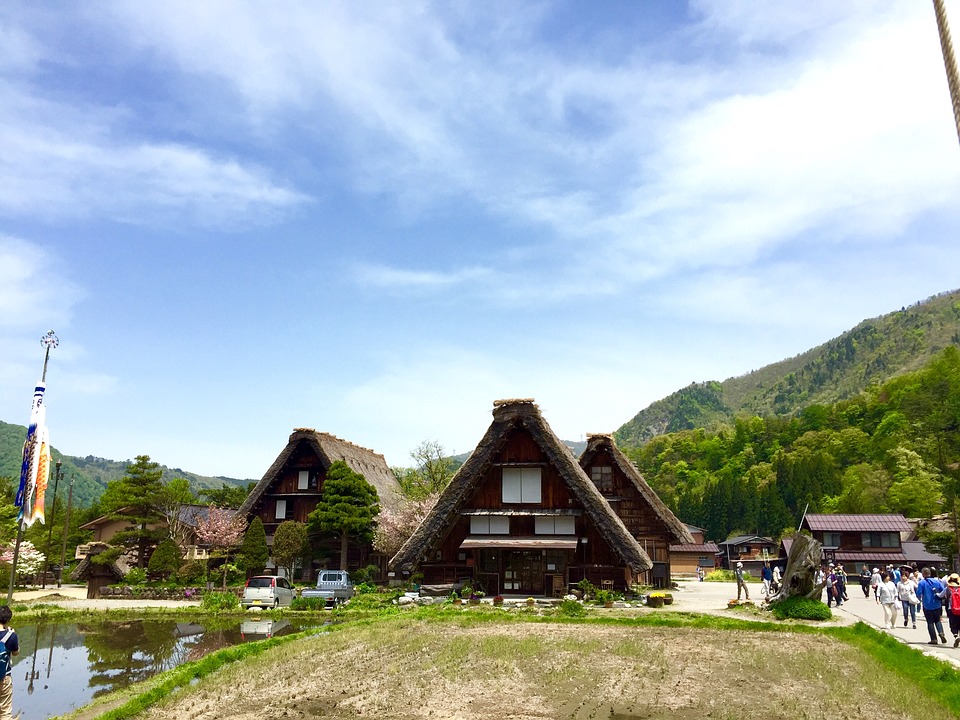 The best way to experience the village of Shirakawa is by staying overnight. Instead of thinking of hotels, the most recommended option for guests in Shirakawa is to opt for farmstays. Basically, several farmhouses in the village also serve as minshuku. This way, guests are able to experience what it is like to stay in a gassho-zukuri house. This is the highly recommended option for tourists in the area.

Most farmstays incorporate the traditional style. This means that guest rooms usually consist of tatami mat floors as well as a low table. Guests are to sleep on futon at night. While the style of the guest rooms is traditional, baths and toilets are usually already modern. However, they are also often shared. While these farmhouses cannot offer the high-quality amenities that most hotels provide, the experience is exceptional nonetheless.

Even though these farmhouses already have some sort of modernity in it, they still offer a rustic atmosphere and environment. Made of wood, these farmhouses feel and look vintage. They also still incorporate traditional tools and facilities such as an open fireplace called irori. This is where heating and even cooking is done instead of the modern stove. The irori is typically located in the common dining room.

It may cost about 8,000 yen to 9,000 yen per head in order to stay overnight at a farmhouse in the village. This price already includes dinner and breakfast. Foods served typically incorporate local dishes that may be interesting to try to tourists. Because the winter season can be rather harsh, an additional heating surcharge may also be applied, which only costs about 300 yen per head.